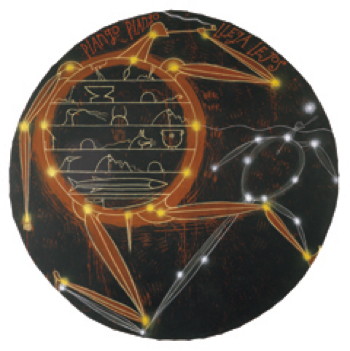 The Fowler Museum at UCLA presents Transcultural Pilgrim: Three Decades of Work by José Bedia, an exhibition that brings together 28 large-scale figurative paintings and drawings and a newly commissioned, site-specific installation to offer a comprehensive retrospective on this acclaimed member of Cuba’s “Generation of the ‘80s,” the pioneering young artists who incorporated Cuban vernacular and spiritual references into their work and experimented with eclectic visual forms.

The exhibition, which opens Sept. 17 with a conversation between Bedia and curators Judith Bettelheim and Janet Catherine Berlo, will be on display from Sept. 18 through Jan. 8, 2012.

Bedia’s ‘official’ entrée into the international art world came in 1989, with his installation in the exhibition Magiciens de la terre at the Centre Georges Pompidou in Paris. But several years prior, in 1985, Bedia had been included in a small group exhibition of Cuban artists at the State University of New York College at Old Westbury, on Long Island. While in New York, he attended a gallery opening in Soho and met artist Jimmie Durham, who introduced him to artists Claes Oldenburg and Coosje van Bruggen. Oldenburg and van Bruggen took an interest in Bedia’s work and, to cultivate Bedia’s interest in Native America, they provided the funds to send him and his colleague Ricardo Rodríguez Brey to the Rosebud Indian Reservation in South Dakota.

This chance meeting with Durham, Oldenburg and van Bruggen proved to be pivotal in forging an important direction in Bedia’s art; indigenous America continues to play a vital role in his production.

The 30 years of Bedia’s work on display in this exhibition can be understood in the context of conversations on “post-national” and “post-essentialist” art, especially as these concepts developed into discussions of the New Internationalism, cosmopolitanism and globalization. Bedia’s “global” is centered on an exploration of and participation in diverse spiritual worlds. He has consistently sought artistic and spiritual peers, whether in the Sonoran Desert of Mexico, the North American plains, the Amazonian rain forest, the Dominican countryside or the Central African savanna, in what amounts to his own take on cosmopolitanism and internationalism.

Bedia’s drawings are punctuated with collaged historical photographs, and he moves easily between black-and-white charcoal drawings and vibrant, colorful acrylic paintings, as well as between small- and large-scale canvases. His distinctive figural style is rendered in graceful yet powerful gestural lines, sometimes incorporating short, meaningful and often sacred texts in Spanish, Kikongo or Lakota.

His canvases are often packed tightly with portrait-like depictions, combining to produce pictorial narratives. At times, he paints with his hands in bold and dramatic strokes, yet he also creates precise drawings to depict his experiences. In his many large-scale environments, he combines seemingly banal objects — store-bought figures and materials associated with Arte Povera such as dirt, rope, stones or sticks — ideographic designs, and large-scale wall paintings.

The trajectory of Bedia’s work unfolds as a narrative of the transcultural journeys he has made. The first section of the exhibition includes eight works that deal with his involvement with the Afro-Cuban religion Palo Monte, which he has practiced since the early 1980s in Cuba. Bedia was initiated into Palo Monte in 1983 and immersed himself in the religion’s history and rituals.

For Bedia, the power of the central icon of Palo Monte, the nganga (a cauldron or pot), takes on iconic proportions and is a recurring motif in his work. A number of paintings in this section portray the nganga — first shown empty and then, on other canvases, filled with the sacred objects that signify the artist’s increasing knowledge and power attained through initiation and practice.

The works in the next section comment on and chronicle Bedia’s travels in Mexico, as well as his studies with Lakota peoples and visits to shamans in the Peruvian Amazon. Another grouping features four works that pay homage to Caribbean revolutionary figures who combined their religious beliefs with a strong sense of activism and social justice. Three final, large paintings, each approximately 15 feet wide, reflect Bedia’s longstanding interest in African art, as well as the pilgrimages he made to Zambia to work with diviners and view masquerades.

Three “Moments of Inspiration” present objects from Bedia’s personal collections that relate to the subjects of his paintings within the gallery. Bedia is an ardent collector: his Miami home contains hundreds of sculptures, textiles and drawings, principally from Africa and the indigenous Americas. Of this vast collection, he says, “I collect these objects to learn from them. For me, this is like a library. These are my books. That’s why I keep them in front of me every day.” 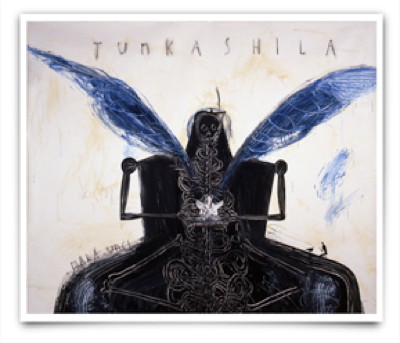 The Fowler Museum has also invited Bedia to curate a concurrent small exhibition that draws on the museum’s permanent collections. In “Bedia Selects,” the artist offers intriguing new insights into the Fowler’s collections and into some of the artistic and intellectual interests that have driven his own practice. Highlighting works from Central Africa, Bedia’s selection brings more than 30 pieces out of storage for the first time, including a rare Sala Mpasu dance platform that is one of only three such known works in collections.

“I am truly grateful for the opportunity the Fowler is giving me to make a small selection of objects based on my aesthetic criteria in conjunction with my personal show,” Bedia said. “It is a great sign of trust for the Fowler to allow me to curate a group of African objects that have the peculiar aspect of not being the “classic” figures (or masks) most commonly known in relation with African art … These pieces cover a great margin, from simple and utilitarian to religious and ceremonial. They are also all extremely beautiful and possess a very sophisticated technical manner that also pervades their content.”

Bedia was born in January 1959, the same month and year Fidel Castro marched into Havana. He graduated from the Instituto Superior de Arte and was included in the groundbreaking Havana Biennials of the 1980s. He was selected for the exhibition “Magiciens de la terre,” held at Paris’ Centre Pompidou in Paris in 1989, and in 1991 moved to Mexico. In 1993, he immigrated to the United States. He presently lives and works in Miami.

Bedia’s major projects include an invitational installation concurrent with the Saõ Paulo Biennial and a traveling retrospective organized by the Institute of Contemporary Art at the University of Pennsylvania in Philadelphia, both in 1994, and exhibitions at the Museo de Arte Contemporáneo in Monterrey, Mexico, and SITE Santa Fe in New Mexico in 1997. He had a major solo exhibition at the Museo de Badajoz in Spain in 2004. Bedia was featured in the 2008 group exhibition “NeoHooDoo: Art for a Forgotten Faith” at the Menil Collection in Houston and P.S. 1 in New York. In 2010, his work was included in “Without a Mask,” an exhibition of contemporary Cuban art at the Johannesburg Art Gallery. In spring 2011, the Centro Atlántico de Arte Moderno in Las Palmas, Canary Islands, mounted a retrospective exhibition of Bedia’s installations. The artist has received a number of prizes and awards, including First Prize in Painting at the IV Beijing International Biennale in 2010, a Guggenheim Fellowship in 1993 and a prize at the Second Havana Biennial in 1986.

Bedia’s work is in the collections of the Los Angeles County Museum of Art; the Museum of Contemporary Art, Los Angeles; the Museum of Modern Art, New York; the Whitney Museum of American Art; the Guggenheim Museum; and the Miami Art Museum, among others. Museums in Latin America and Europe with Bedia holdings include the Museo de Bellas Artes in Caracas, the Museo Nacional de Bellas Artes in Havana, the Afrika Museum in Berg en Dal, and the Tate Gallery in London.

Transcultural Pilgrim: Three Decades of Work by José Bedia is organized and produced by the Fowler Museum at UCLA and guest curated by Judith Bettelheim, with co-curator Janet Catherine Berlo. Major support for the exhibition is provided by the National Endowment for the Arts and the Donald B. Cordry Memorial Fund. Additional support is provided by the Fay-Bettye Green Fund, the Pasadena Art Alliance, the UCLA Latin America Institute and Manus, the support group of the Fowler Museum.

A book, also titled “Transcultural Pilgrim: Three Decades of Work by José Bedia,” by Bettelheim and Berlo, with contributions by Bedia, Lauren Derby, Orlando Hernández and Alan Varela, will be published by the Fowler this fall and distributed by the University of Washington Press.

Free drawing workshop Oct 2, in conjunction with the exhibition Transcultural Pilgrim: Three Decades of Work by José Bedia and The Big Draw L.A.

This event is part of The Big Draw L.A.

Fowler Museum, in the heart of UCLA’s north campus.

The Fowler Museum at UCLA is one of the country’s most respected institutions devoted to exploring the arts and cultures of Africa, Asia and the Pacific, and the Americas. The Fowler is open Wednesday through Sunday from noon to 5 p.m. and Thursday from noon to 8 p.m. The museum is closed Mondays and Tuesdays. The Fowler Museum, part of UCLA Arts, is located in the north part of the UCLA campus. Admission is free. Parking is available for a maximum of $10 in Lot 4. For more information, the public may call 310-825-4361 or visit the official site.