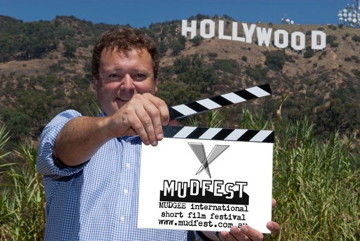 Get a taste of Australian cinema! MudFest has been announced as an Official Satellite Event of the G’Day USA Festivities, with a special evening of all-Australian short films being screened in Los Angeles on January 17, 2012 at the Egyptian Theatre in Hollywood.

Mudgee’s MudFest International Short Film Festival – lovingly known as Mudfest – has been showcasing short films from around the globe every year since 2005. Held in March every year, MudFest takes place at Bunnamagoo Estate, in Mudgee, New South Wales, Australia.  This year Mudfest will be held on Saturday, March 17, 2012.

MudFest is an Official Satellite Event of G’Day USA and will be the only Australian Film component in the Los Angeles line-up of G’Day Events next year.

MudFest Co-founder and G’Day LA Festival Director Mike O’Malley travelled to Los Angeles recently to finalize arrangements for the MudFest screening and to meet with a number of Australian Film Industry Organisations based here. “It’s taken several years to convince the G’Day USA Organising Committee to include us, but our Committee couldn’t be more excited at the prospect of taking MudFest to Hollywood” he said. “This is a great thing for MudFest and for the Mudgee Region.”

MudFest G’Day LA is sponsored by Destination NSW (formerly Tourism NSW), Qantas, and local winery Bunnamagoo Estate Wines. “We’ll have a fantastic opportunity to promote our Festival, our Region and Wines from Mudgee to the Los Angeles audience” Mr O’Malley said. “MudFest has always had great support from the Mid Western Regional Council and Mudgee Region Tourism. This will be our chance to promote Mudgee internationally.”

This evening of screenings will feature a Mudgee Tourism element, and our pre-screening party will feature canapés made using Australian produce matched to local Wines from Bunnamagoo Estate. “We’re hoping the media attention that MudFest in Los Angeles generates will draw more people to MudFest Mudgee at Bunnamagoo Estate next year.”

The Los Angeles screening will take place at the historic Egyptian Theatre on Hollywood Boulevard in the heart of Hollywood. “You couldn’t get more ‘Hollywood,’” Mr O’Malley enthused. “We’re screening half a block from the famous Grauman’s Chinese Theatre and right on the Hollywood Walk of Stars.”

The movies screened will be a selection of the best Australian entries submitted to Mudfest since the Festival began in 2005. The entire MudFest Committee (Steve Garland, Mike O’Malley, Peter Scott, Phil Van Gent and Sean Wolfson) will be attending the LA screening as ambassadors for the region.

Details of the 2012 G’Day USA program can be found at their official site.

an Official Satellite Event of the G’Day USA events