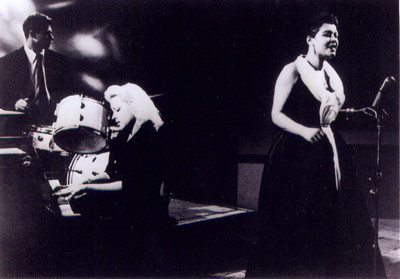 Corky Hale, a Jazz pianist who once accompanied the late, great American Jazz singer Billie Holiday, is joining up with singer Freda Payne, along with singer (and daughter-in-law) Tricia Tahara, to present A Birthday Tribute To Billie Holiday for one night only at the Catalina Bar & Grill in Hollywood.

Tomorrow night the three women will perform an intimate tribute in honor of the late Billie Holiday’s 97th Birthday.  The program will include signature songs that Billie Holiday was strongly affiliated with, including:  “Them There Eyes,” “My Man,” “Billie’s Blues,” “God Bless The Child,” “Strange Fruit,” “Lady Sings The Blues” and “Don’t Talk About Me When I’m Gone,” among others.

Although Billie Holiday never received any professional music training, nor could she read music, her natural talent propelled her career forward as she performed at various clubs, working for tips in the early days.  Corky Hale played piano for Billie Holiday later in her career while Hale was working with the Jerry Gray Band in Las Vegas. Hale also recorded with Holiday on “The Ultimate Billie Holiday Collection.”

Harp player, vocalist and pianist, Corky Hale is well known within the jazz scene. She has also worked as a theatre, film and record producer, a political activist, a supporter of numerous charities, and has even owned a restaurant on the Upper East Side in New York and, during the late sixties, an eponymous clothing store on Sunset Blvd.

A Birthday Tribute To Billie Holiday

Reservations for the show and dinner can be made by calling Catalina Bar & Grill,

For further information about the performance, please visit the official website.

About The Performing Artists:

Corky Hale (Pianist and Vocalist) was born in a small mid-western farm town and started taking piano lessons at age three.  At age seven, while vacationing with her family in Florida, Hale was heard in the lobby of her hotel picking out tunes on the piano by House bandleader, Horace Heidt.  Heidt had a little band jacket made for her and featured her for the next few weeks in the evening show.  She began studying piano at Chicago Conservatory at the age of seven, and harp at the age of eight.

She has performed at The White House with Tony Bennett, soloed with Barbra Streisand in Central Park and at the Hollywood Bowl, and performed with Björk on her MTV Special in London.  Hale has also appeared with George Michael at London’s Royal Albert Hall and Washington, D.C.’s RFK Stadium.

She has played harp for Liberace (both on his television show and at Madison Square Garden) and Judy Collins, piano for Billie Holiday, Mel Tormé and Peggy Lee, and sung with the bands of Harry James, Ray Anthony and Jerry Gray.

Hale’s harp, piano and vocals can be heard on her five albums available on CDBaby and Amazon.

Freda Payne (Vocalist) grew up in Detroit, MI.  Payne’s dream was to express herself by means of the playing the piano.  At the age of 12, under the direction of piano teacher Ruth Johnson, dance instructor Beatrice Summers and mentor Mack Ferguson, Payne received the kind of guidance that would prove to be the foundation of what would follow.  At the age of 13, Payne performed her first studio recordings (United Sound Studios in Detroit), “Father Dear,” “The Moon Rock” and “Applications of Love” – written and produced by impresario and Motown Recording Company founder, Berry Gordy, Jr.  From those early recordings to her 1970 mega-hit “Band of Gold,” written and produced by Holland, Dozier, Holland, for Invictus, to her latest project titled “On The Inside,” Payne has sculptured a noteworthy musical legacy.

Tricia Tahara (Vocalist) is a Los Angeles resident and Savant Records recording artist. She was raised in Detroit, MI on an eclectic mixture of rock, pop, opera, and Broadway show tunes.  She honed her classical technique at the University of Michigan in Ann Arbor, developed her jazz chops at the Berklee College of Music, and hit the road with rock and funk bands that took her literally around the world.

Billie Holiday was born 97 years ago on April 7, 1915.  Her birth name was Eleanora Fagan.  She grew up surrounded by Jazz music in Baltimore, MD in the 1920s.  As a teenager she began singing in after-hours Jazz clubs.  Holiday eventually moved to New York in 1928 with her mother, Sadie Fagan.  She applied for a job as a dancer, which she didn’t get, at Jerry Preston’s Log Cabin, a nightclub.  The pianist who played for her audition asked her asked her if she could sing.  She brazenly told him she could, and began singing the songs, “Travlin’ All Alone” and “Body and Soul.”  As a result, he was hired to sing for $2 a night for six nights a week working from midnight until 3:00 p.m. the next day.

She later performed in some obscure Harlem nightclubs.  Holiday took her professional name from her father Clarence Holiday, a guitarist who played with Fletcher Henderson’s band in the 1920s and from a favorite movie actress of her childhood, Billie Dove.

By the age of 18, Holiday was discovered by music producer, John Hammond, who cut her first record as part of a studio group led by Benny Goodman.  Her first recording, “Your Mother’s Son-in-Law,” was made in 1933.

By 1935, Holiday’s career blossomed as she recorded four sides which went on to become the hit songs, “What a Little Moonlight Can Do” and “Miss Brown To You,” leading to a recording contract of her own.  During the course of her career, her recordings often included musicians from the Count Basie Band.  She continued to record a number of master tracks until 1942 that would ultimately become important foundations for American Jazz music.

In 1936 Holiday began working with Jazz tenor saxophonist and clarinetist, Lester Young, who dubbed her, “Lady Day,” her now famous nickname.  Holiday became the first black women to work with a white orchestra while performing with the bands of Count Basie in 1937 and Artie Shaw in 1938.

While Holiday was working for Columbia Records in the 1930s she was introduced to the emotional poem, “Strange Fruit,” about the lynching of two black men.  The poem was written by Abel Meeropol, a Jewish high-school teacher from the Bronx, who published it under the pen name of Lewis Allan.  In her autobiography, “Lady Sings the Blues,” Holiday advised that she, along with Lewis Allan, and her accompanist

Sonny White, and arranger Danny Mendelsohn, set the poem to music.  Although Columbia Records wouldn’t record the song due to its subject matter, Holiday recorded the song in two major sessions at Commodore, one in 1939 and one in 1944.  In time, it became Holiday’s biggest selling record.

Despite some run ins with the law on drug related issues during her career, Holiday appeared in the film “New Orleans” in 1946 and was featured in a Broadway revue for a short time.  In 1954 she toured Europe and was featured on the popular television program, “The Sound of Jazz” in 1958.

From 1952 to 1959, Holiday recorded about 100 recordings on the Verve label.  She made her final studio recording for the MGM label in March of 1959.  Holiday’s dramatic abilities, phrasing and diction were hallmarks of her singing style.  The white gardenias she wore in her hair, became her trademark, along with snapping her fingers lazily with the rhythm of the music, while cocking her head back on a jaunty angle as she sang.  Holiday wrote in her book, “Lady Sings The Blues,” that “singing songs like “The Man I Love” or “Porgy” is no more work than sitting down and eating Chinese roast duck, and I love roast duck.  I’ve lived songs like that.”

Billie Holiday died on July 17, 1959 in Metropolitan Hospital in New York at the age of 44 of congestion of the lungs complicated by heart failure.  Today, Billie Holiday is musical legend remembered for her soulful, emotive voice and indelible song interpretations, which have cemented her reputation in musical history as one of the greatest Jazz voices of all time.