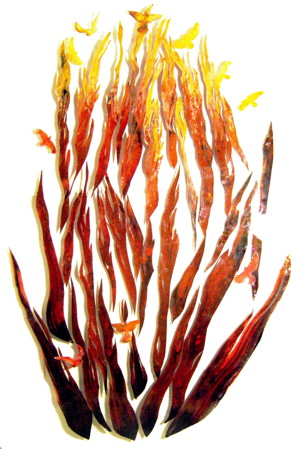 Award-winning painter, writer and professor at the USC School of Cinematic Arts, Pam Douglas, launches the second in a trilogy of art shows inspired by earth’s primal energies—Water, Fire and Wind. The Life of Fire opens July 17, 2012 (and runs through August 11, 2012) at Bergamot Station’s TAG Gallery in Santa Monica and features Douglas’ original paintings that evoke the transformative power of fire.

“Fire is second in a 3-part series—The Life of Water was Part One and Wind will be Part Three,” states Pam Douglas, whose previous exhibits include The Los Angeles County Museum of Art (LACMA) sales and rental gallery, juried shows at TarFest, i-5 Gallery at the Brewery Art Complex, and The California Open. Her pieces are in private collections throughout the country. “So the subject of fire is not a climax to the series but a middle point in the journey from the most pliable, sometimes gentle energy of water, to aggressive and powerful fire that defies boundaries and forms, to the ultimate transcendence of air, which will be the subject of my 2013 show.”

Douglas will exhibit 10 paintings for The Life of Fire. Five of the pieces use inks and acrylic on raw linen mounted loosely to enhance the fabric’s natural texture. The other half are multi-layered transparent plastics. According to Douglas, painting fire led to transforming how she works and introducing surprising new media such as transparent plastic and plexiglass. She says, “The change to sharp edges and the way plastic warps when wet or glued was outside of my comfort zone. But I had challenged myself with interpreting the essence of fire, and there was no way the spirit of fire was going to settle down. The subject pushed me to explore and defy boundaries about the kinds of paintings I do. It’s been difficult, and through making me try new materials that react differently with paint, fire ‘burned through’ my pre-conceptions and forged something new.”

–       Redemption (36 x 58″, mixed media, plastics in plexi box): emanating from a dark heart of blues and black, flames reach upwards and fan out through reds culminating in tips of yellow and white. Since this piece is constructed with cut strips of thin, transparent plastic, the forms ripple in a way that bounces light. Uplift–the transformation from darkness to light–was my visceral urge while creating the piece, and that’s what I mean by the title “Redemption,” bringing enlightenment or possibilities from what was past.

–       Flying Fire (28 x 61″, acrylic on raw linen, framed) is an exuberant expression of richly textured hues, where the red spectrum is underscored by touches of brilliant blue. Set against the black ground, it says that energy cannot be suppressed. In terms of the series, this painting is a “rhyme” with “Flying Water” from last year’s show, and is the same size and medium as the earlier piece. Expect “Flying Wind” in 2013.

–       Rite of Passage (52 x 23″, mixed media, plastics mounted in plexi) is the only piece in the show that refers to an object on fire–all the others are abstracted interpretations of the idea of fire. The white circular area at the bottom, made of ink and acrylic on paper, suggests the bones of a building arranged in a rhythmic pattern of black lines. Rising from it are red plastic flame-like forms, reaching up in an abstracted pattern. My intention was not to depict a structure on fire — it was more a matter of experimenting with shapes and mixed mediums in an interesting graphic. The title “Rite of Passage” refers to the series theme of transformation: as one thing dies another is born.

–       Heartbeat (25 x 27″, acrylic on raw linen, framed) is the smallest piece in the show and the most simple in form –a half circle. The energy of this painting resides in textures. From beneath the cracks in the red sun-like form, other colors can be glimpsed: blues, greens, and yellows. The intention is abstract–it’s not really a sunset or sunrise or a view of some smoldering planet–but an expression of passion, or the fiery energy of a heart, thus “Heartbeat.”

–       The Eternal Beginning (diptych; acrylic on raw linen, framed; 28 x 52″) is about transformation; just as the sun and moon go through cycles, so does life on Earth. We are perpetually renewing or understanding that endings are not final, or having the courage to begin again after an eclipse in your life. This is the idea that the sun will shine again and that a new beginning is always possible.

A commentary from the ancient Chinese book I Ching weaves between Douglas’ seven paintings on a 20′ wall in the main entry. Douglas is joined by five other artists in the Shared Thread exhibit, that will be on display for 6 months. The installation includes paintings from her 2011 show The Life of Water:

Three Special Events for “The Life of Fire”

This event is free and open to the public.

This event is free and open to the public.

“The art stands on its own as images with intrinsic power,” she says. “But by presenting images that inspire wonder or appreciation or aesthetic joy, I hope to offer subtle encouragement towards raising consciousness.

Tuesday through Saturday 11AM – 5PM;

For more information about Pam Douglas and her work, visit her website here.