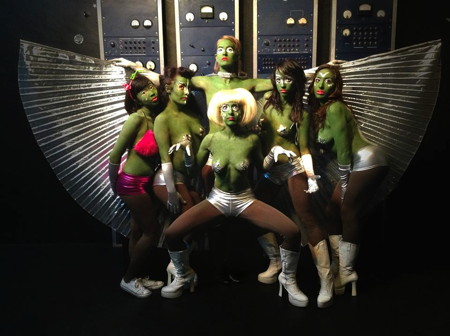 Greetings Earthlings! This theater review for the LA Weekly is of the hilarious retro sci-fi romp “Captain Dan Dixon vs. The Moth Sluts from the Fifth Dimension,” now playing at Zombie Joe’s Underground Theatre in NoHo.

A nicely acted, crisply directed and neatly written piece of 1950s sci-fi comedy, featuring nearly naked, green-painted, go-go-dancing space aliens — what’s not to love?! Playwright Matthew Sklar stars as Captain Dan Dixon in his creature-feature retro romp through space. Panels of switches, buttons and analog meters signify the interior of a spacecraft as he and his crew of seven rockets into the fifth dimension, causing a purring, whirring sextet of moth-like minxes to materialize.

To read the remainder of this review, go to the LA Weekly’s theater page and scroll down.