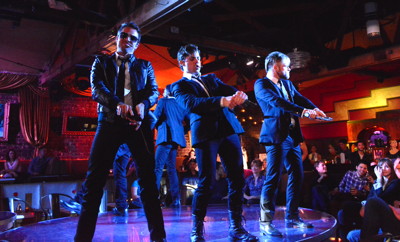 “For the Record: Tarantino” finds its stride in new digs at DBA Nightclub in Hollywood – Los Angeles cabaret theater review

Last Thursday night the ‘For the Record’ company reprised one of their early shows, For the Record: Tarantino, serving up some dynamite entertainment in their brand new and more spacious location.

With its larger central stage area and luxe seating throughout, DBA Nightclub proved the perfect venue for the production’s energetic and electrifying show. Devised and directed by Anderson Davis, the show mashes up snippets of the most memorable scenes from the movies of writer/director Quentin Tarantino and intersperses them with amazing renditions of the iconic pop songs that feature in his films.

We get breathtakingly swept from the ‘Like a Virgin’ monologue from Tarantino’s first movie (as director) 1992’s Reservoir Dogs—kicking off the high octane show—right into the exciting hold-up sequence from Pulp Fiction. Danielle Truitt then dazzled with a powerhouse rendition of ‘Street Life’ (from Jackie Brown). The infamous torture scene from Reservoir Dogs somewhat amusingly becomes a duet between the sadistic torturer and his trussed up victim (!)

Yes, ultra-violence, profanity and black humor are all dominant aspects of this tribute to one of contemporary America’s most darkly comedic and brutal filmmakers. Rumer Willis impresses with her ‘great pipes’ when she belts out ‘Bang Bang (My Baby Shot me Down)’ from Kill Bill Vol 2.

The opening night cast included Rumer Willis, Danielle Truitt, Lindsay Pearce, James Byous, Reign Morten, Ciaran McCarthy, Joanna Jones, Rogelio Douglas Jr. and Patrick Mulvey. This dynamic cast of eight are (for the most part) black clad and packing heat. The whole show nimbly skips back and forth from the different Tarantino movies with a remarkable ease. The cast handle all the transitions and dialogue with aplomb. This is a slick and well-rehearsed show—their hard work really shows.

This show was originally staged a little over three years ago in Los Angeles at Rockwell: Table & Stage as the first show in the “For The Record” series which celebrates songs and moments from the body of work by a featured director.  A talented troupe of performers that includes a rotating ensemble of Film, Television, Record and Broadway talent come together to present this unique fusion of music, theater and film that brings motion pictures to life in a concert setting.

Series creator Shane Scheel states, “To watch this idea and show grow over the past couple of years from an intimate concert in front of about forty friends to now performing in front of hundreds of people every week has been an incredible journey.” Scheel continues, “Having Quentin Tarantino come to see “For The Record: Tarantino” and absolutely love it reaffirmed that what we are presenting is truly something special and unique.”   Unquestionably a master of modern American film, Tarantino has also mastered the art of the movie soundtrack with song choices that have helped define his signature style. This retrospective highlights hit Tarantino directed films including Reservoir Dogs, Pulp Fiction, Jackie Brown, Four Rooms, Kill Bill Vol. 1 and 2, Death Proof, Inglourious Basterds, and Django Unchained.

For The Record: Tarantino brings the movies of Quentin Tarantino to life through the soundtracks he meticulously integrated into each of his films. Add the live band, the dynamic performances and Broadway-standard singing and you have a killer show!

The night after opening, last Friday eve, Quentin attended the show and clearly had an enjoyable time. He is pictured here (above ^) seated in an adjacent booth to Demi Moore and her daughter Rumer Willis (alternating with another performer embodying the Uma Thurman roles during the show that night).

For The Record: Tarantino

DBA Nightclub is located at 7969 Santa Monica Blvd in West Hollywood and valet will be available.

Cocktails and gourmet snacks are available for purchase, however, full food and dining is not offered.