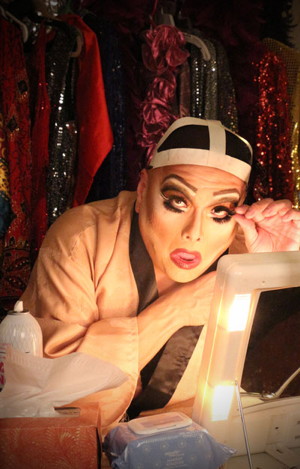 As a recent transplant from Los Angeles, where I covered theater for several years, I was most interested in checking out the stage scene upon my arrival in San Antonio last fall. As fortune would have it, the first show I reviewed was the annual production of The Rocky Horror Show at the Woodlawn Theatre, featuring stars from the hit TV show RuPaul’s Drag Race.

I was impressed by the elaborateness of the production and the talent on display. Subsequent shows I’ve seen there — including White Christmas and The Addams Family — were similarly well-crafted, and my curiosity was piqued. So, in preparation for the Woodlawn’s upcoming extravaganza, La Cage Aux Folles, I thought I’d take an opportunity to get a behind-the-scenes look at the theater and the people who make the magic happen.

The Woodlawn opened in 1946 as a single-screen movie house. (Remember those?)  John Wayne premiered his 1960 film The Alamo there, but the rise of multiplexes and home video in the 1980s almost sounded the death knell. Fortunately, the building was able to escape destruction, and in 2012 it found a new life as the home to one of San Antonio’s foremost musical theater companies.

Not only does the Woodlawn provide the community with great live theater, it serves as a valuable resource for those who work — or want to work — in the field. There’s also a year-round Children’s Theatre Program that offers classes in drama for the younger generation. Additionally, the theater contributes to the local economy and the regeneration of the Deco District.

Greg Hinojosa serves as the artistic director for the Woodlawn. He oversees the artistic integrity of all the Main Stage productions and directs four of them himself per year. He teaches classes and workshops through the Academy for the Performing Arts and Community Outreach programs. In La Cage, he’s also taking the role of Albin/Zaza, and he is enthusiastic about participating in this fun and flamboyant show among such terrific talent.

La Cage‘s director, Tim Hedgepeth, is equally happy to be working at the Woodlawn on this production. He considers this theater his good luck charm, having previously launched his own musical theater company there. He’s also delighted to be reunited with musical director Andrew Hendley and choreographer Chris Rodriguez. “I lucked out in getting Andrew and Chris. We have all worked together, on different shows at different times, and it’s such a pleasure that La Cage is the the first one that brings all three of us to the table at the same time.”

Hendley, who has been working in local theater since 2001, says, “The musical talent pool in San Antonio continues to grow. We have such talented singers, dancers and performers that it makes working with casts a breeze.” He leads a band of eight musicians for La Cage. Live music is a hallmark of the Woodlawn, and it makes a big difference.

About the local theater community, Hedgepeth says, “I think we are in a very good, creative place. I worry that theaters are sometimes competing for limited audiences, and I’m not sure if that’s a good thing or not. What I really appreciate are the numerous opportunities for theater artists to work in a variety of venues around town.”

As for the Woodlawn itself, Hedgepeth calls it “a grand and sometimes terrifying, glorious old picture palace in which echo the voices of old Hollywood and present-day San Antonio.” It’s certainly a great house for the productions being staged here throughout the year. Upcoming shows include Mary Poppins, West Side Story and American Idiot — an ambitious slate indeed.