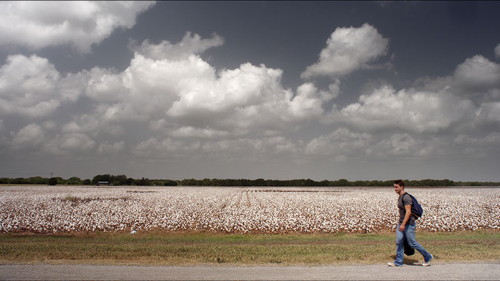 A silver-tongued convict on the run from the cops meets a young man trying to escape his past, and together they form an unlikely alliance on the highways of Texas.

The year is 1980, and Jake (Will Brittain) seems to have his life going in all the right directions. He’s got a supportive mother, Becky (Katherine Willis), and an adoring girlfriend (Zoe Graham). An aspiring photographer, he’s getting ready to go to college and begin his adult life.

But when his absentee father, Frank (Holt Boggs) shows up and wants to come back home, Jake wants no part of it. Frank is a Vietnam vet whose alcoholism has caused him to be abusive in the past, and although Becky wants the family to be complete again, Jake decides it’s better to hit the road and hitchhike to California.

He is arrested in New Mexico, where the cops take his last fifty bucks. Broke and desperate, he bums a ride with Smitty (Glenn Morshower), a fast-talking ex-con who is likewise on the ropes but more than happy to enlist Jake in his grifting schemes. Jake balks at first, then reluctantly begins to participate and eventually discovers that he’s good at the game, too… maybe even better than Smitty.

Meanwhile, these two lost souls find themselves growing closer along the way. Even with his con artist ways, Smitty seems to be the father figure Jake has been longing for, and Jake serves as a stand-in for Smitty’s son, whom he hasn’t been able to see for years. Smitty plans to go to Florida to work for a buddy’s fishing outfit, and Jake asks to come along. Smitty has a crisis of conscience, however — he realizes that he doesn’t want Jake to travel the same rough roads that he has.

What makes this potentially clichéd scenario work so well is the ease with which the material is handled. Rolling along easily like a car trip through the tiny Texas towns, it develops an irresistible rhythm of its own.

The lead actors are excellent. Morshower’s Smitty can easily charm the birds from the trees, and Brittain does a credible job transforming Jake from an angry youth to a self-assured conman. Director Claude Green and co-writer Jack Ballo’s screenplay doesn’t pass judgment on either of them, and that’s what makes it work so well. Refreshingly lacking any Hollywood-style dramatic explosions, we’re given a character study reminiscent of the work of Horton Foote.