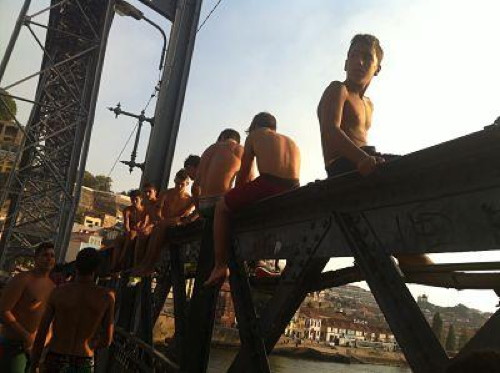 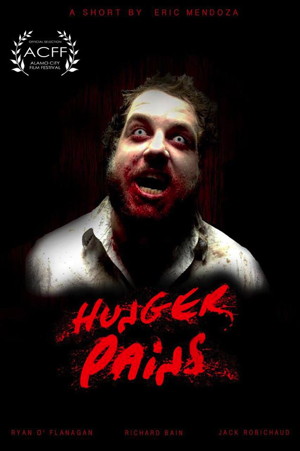 Report and film reviews from the Alamo City Film Festival by our man in Texas, Kurt Gardner:

In keeping with its mission of showcasing films and filmmakers from around the world, the Alamo City Film Festival brought an international selection of shorts to its debut at the Lila Cockrell Theatre in San Antonio this past weekend. Here are some of the most engaging entries I had the opportunity to view:

After the zombie apocalypse,  regular schlub Carl (Richard Bain), who’s been transformed into one of the living dead, finds himself in search of a human meal like everyone else — but he faces the same rejection he did when he was alive.

Hilariously vulgar and twisted, Hunger Pains features spot-on performances from Bain, Robichaud as the zombie leader who tells him to piss off (when he tries to get in on their feast) and O’Flanagan as the human survivor and former co-worker whom Carl recognizes from his former life. Well-shot by Mendoza, the film also features some nice, gruesome effects work by Hirsch. And the sting in the film’s tail is a riot.

Since the Alamo City Film Festival runs in the same space — and at the same time — as Alamo City Comic Con, it makes perfect sense to program a short like this about a bunch of comic book geeks trying to launch their own show — “The Wrath of Con” — in a run-down conference center in Burbank.

A failed comic book scribe, whose partner ditched him to go to the San Diego Comic Con, decides to invest what’s left of his money in this new monthly convention, but it quickly devolves into an underfunded, xeroxed mess.

Naturally, egos spiral out of control as everything goes wrong. Anyone who’s attended or worked behind the scenes of a public event will find much to amuse them here. Best of all are the send-ups of familiar tropes (a horde of elaborately made up zombies arrives an hour too early; Ralph Macchio’s arrogant agent is furious at having been forced to drive to the “ghetto” of Burbank).

Although the film eventually finally relies too much on a rather conventional (get it?) love story, there are still enough zingers hitting their targets.

Children of the River (Spain/Portugal)

Set in the stunning medieval riverside district of Porta in Portugal, Children of the River tells the story of a boy’s sexual awakening and longing for his somewhat older female neighbor. With its child-as-an-adult narrator and themes of precocious sexuality, it brings to mind Jean-Claude Lauzon’s magnificent Leolo and the early works of François Truffaut.

But the real star of the film is Porta’s amazing two-level bridge, the Ponte de Dom Luis, whose lower level is reserved for traffic (and the daredevil divers of the title) and the insanely higher upper level, reserved for pedestrians (and suicides).

With its stunning setting and compelling story, Children of the River could easily be expanded into a feature film as memorable as Buñuel’s Los Olvidados or Babenco’s Pixote.

This magnificent CG creation is the story of a tiny cloud that roams the skies in search of companionship — but every time it meets a potential pal (a balloon, a bigger cloud), natural elements get in the way (i.e., the balloon is popped), causing the cloud to turn dark and drip unhappy tears.

Sukegawa’s film is a marvel of production design augmented by a wonderfully melancholy story. What could have been clichéd and icky is instead a lovely waltz in the sky. And the sound that’s been created for our little cloudy protagonist is great.

With all that talent and heart on display — and with the right budget — I can see Sukegawa giving Pixar a run for its money in the near future.