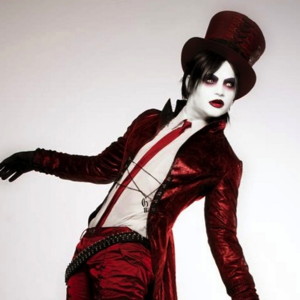 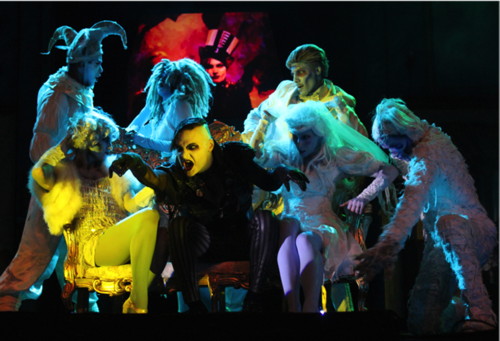 Here is my newest theater review for Stage Raw, the critical theater site.

We recommend this spooky stage  production:

Brimming with imagination, humor and macabre themes, The Ghoulmaster’s Haunted Playhouse is a high-concept and highly inventive cabaret production expressly created for the Halloween season.

The multi-media show introduces us to a mysterious central character, The Ghoulmaster (cult favorite and fashion-plate Pete Carter), who inhabits a spooky mansion along with a quartet of wise-cracking ghosts and a posse of acrobatic and sexy babes. Woven throughout the two-act evening of jokey banter, storytelling and (mostly mimed) song and dance numbers is an original storyline that explains The Ghoulmaster’s unique responsibility for the magic of Hallowe’en. It transpires that he has run out of the magic potion ‘Invectus’ – an important family heirloom – and is awaiting the recipe via mail from Transylvania.

This eerily entertaining show has been built around the persona of The Ghoulmaster, a character that Carter created and developed during his six-season residency at Six Flags Great Adventure’s Fright Fest in Jackson, New Jersey. Elaborately costumed and highly made up (make up designed by Laney Chantal White), Carter as The Ghoulmaster resembles a youthful Marilyn Manson or ‘lost boy’ Edward Scissorhands, with the addition of the lingual dexterity of Gene Simmons (the KISS rocker’s infamously elongated tongue).

For many years Carter performed closely with Michael Jackson as his body double, and so it’s no surprise that many of the King of Pop’s striking and distinctive moves are evident in the crisp choreography throughout, beautifully executed by the immensely talented ensemble who are each triple-threat actors, dancers and singers or acrobats. As lead dancer, and presumably the choreographer of the show, Carter impresses with many fleet-footed glides and snappy, precise gestures (think MJ’s Moonwalk, except sideways).

The show has an appealing blend of high-tech elements (animated projections, special lighting effects, mini-movies) and dinky low-tech features such as hand puppets, some lightweight, fake-looking scenery and even a cardboard-and-aluminum-foil rocket ship. There’s also a (mercifully brief) moment of grand guignol self-mutilation that is designed to make audiences squirm and gasp in horror.

Plays every weekend during October.

Running time – 2 hours, with an intermission.