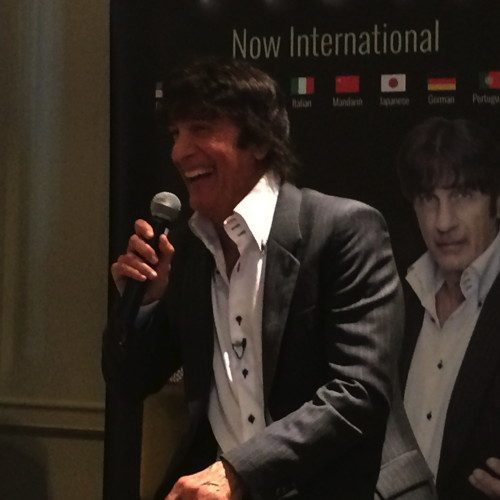 Meeting singing maestro Gary Catona proved to be a pleasant surprise. This is a man who has worked with some of the greatest legends in show business — Whitney Huston, Liza Minelli, Tony Bennett, Andrea Bocelli, Seal and even Muhammad Ali. Naturally, I was expecting to meet someone with a bombastic and overwhelming personality, someone who was larger than life and who would loudly and enthusiastically regale me with his teaching prowess.

Perched on the edge of his stool, with his shaggy haircut and rocker-chic outfit, he comes across as extremely affable and approachable — almost like meeting Ross (David Schwimmer) from the TV show Friends.

Gary’s interest in vocal techniques started when he was trying out as an opera singer. “When I was studying, I had fourteen different singing teachers, all of whom systematically destroyed my voice. And I was a diligent student!” he laughs. “The downside of being a good student is that if you have the wrong teacher, you are screwed, because you do what’s wrong better than the average person.”

Gary goes on to describe his discomfort. “For the life of me I couldn’t understand what I was being taught, and yet I wanted to be a good student and submit to the authority of my teachers. Then, over time, my voice became hoarse and I developed a wobble in it and I couldn’t work out what was going on. I was told I had a breathing problem. So I had some fat lady sitting on my stomach while lying on the floor, all to improve the strength of my diaphragm. I’m lying there with this lady sitting on me and I’m wondering is it really worth it? I’m not kidding! Did Caruso have to go through this? It was ridiculous. At a certain point, after about ten years of abuse, I woke up.”

It finally dawned on Gary that all this instruction was taking the wrong approach because it was not gaining results. “I’d gone as far as I could go with these teachers. I began with a gifted voice…” he smiles, wistfully.

Gary explains that if you study a musical instrument, even if your teacher is not the world’s best, nevertheless your skills will improve over time. “It’s not the same with voice,” Gary cautions. “I began with a good voice, and after ten years of professional training I was left with no voice.”

Instead, Gary went back to college and gained a Masters degree in philosophy. He began doing his own research into the mechanics of the human voice. “I discovered something I was never told about — how the vocal muscles work. It suddenly made sense to me. If the voice is controlled by muscles, why wouldn’t I undergo a training process that builds those muscles?”

He delved into researching the life and career of Enrico Caruso, the renowned Italian opera singer who became world-famous during the early two decades of the twentieth century. Caruso had written a book describing the throat opening and how to sing from the back of the throat — “Ideas that were completely foreign to me, and foreign to all my teachers,” Gary confesses. “Then I began experimenting on my voice and slowly but surely put this training process together.” 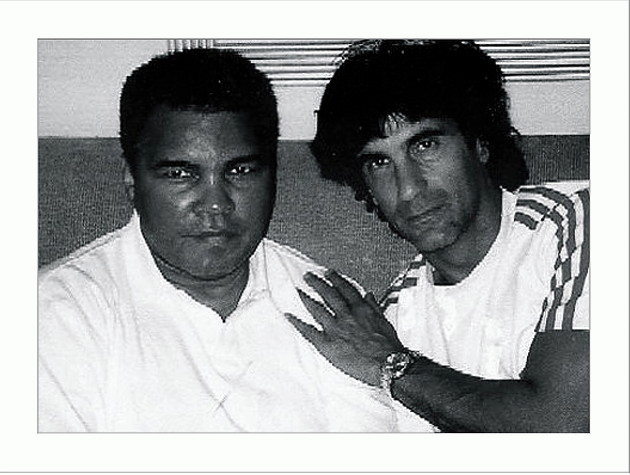 Gary’s first student was Muhammad Ali in 1985. “At the time, he was the most famous person in the world, so everything after that was downhill,” Gary quips. It all came from a chance conversation with a stranger in Austin Texas, where Gary shared his dreams of bringing his voice building techniques to L.A. This stranger had a friend in L.A. who knew Mary Waller — the accountant of Camille Cosby, comedian Bill Cosby’s manager and wife. Gary took the woman’s number even though he felt it was a long shot. “I’m sitting there in my one-room apartment in L. A., starving to death, and I thought, I don’t know anyone, I may as well call up Mary Waller.”

During an informal chat with the receptionist, Gary mentioned that he knew how to work with people to bring their voices back. The receptionist made a quick call and a man named Howard showed up.

Recalls Gary, “The receptionist told the man, ‘Howard — Gary is this miracle voice builder. Call Ali.’ The next day I went over to Muhammad Ali’s house and began giving him lessons. There it is — the American dream in one shot.”

Parkinson’s syndrome had begun whittling away at Muhammad Ali’s powerful voice, diminishing its strength and giving the impression he was slurring his speech. Gary worked with the legendary boxing champ to improve his speaking voice and reinstate some of his confidence.

Even though this proved a major opportunity for Gary, working with Ali didn’t lead to him gaining any students. Rather it was Shirley MacLaine who championed his work and helped him to break through to success. “She discovered me,” Gary simply states. 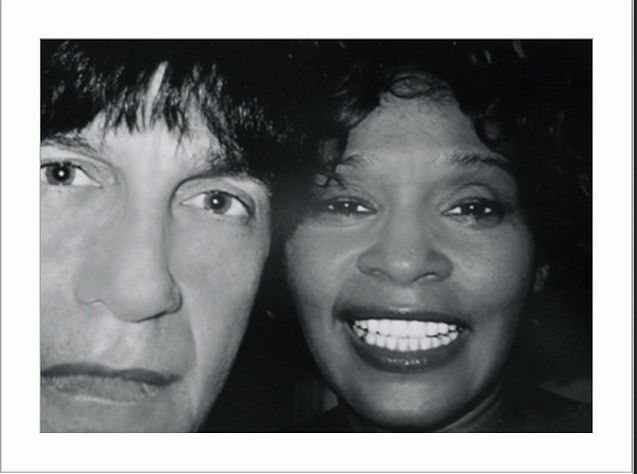 Pretty soon Gary had racked up an impressive list of big-name clients. One of Gary’s most notable success stories was the late, great Whitney Houston. In the seven years leading up to Whitney Houston’s untimely death at 48, Gary trained Houston and together they fought hard to restore her singing voice to its former glory.

Gary had to contend with her years of cigarette smoking and drug abuse, that had resulted in extreme hoarseness, and a dramatic decrease in vocal range and clarity and recurring vocal loss.

As to the severity of her vocal damage, Gary recalls, “She had no voice. Her singing and even her speaking voice were both hoarse. She had no register, just air. I was horrified. I had an image of her as young, beautiful and with an incredible voice, and here she was sitting in front of me with no voice whatsoever.”

Gary adds, “However, she probably had one of the strongest vocal muscles I had ever worked with. When she was singing her best, she kept her tongue flat and smiled with her “i” vowel. She sang in the back of her throat with an open sound, not from the front. And, even in her vocal loss, you still could see the technique working.”

Eventually, Gary was able to get her voice back in shape for her to successfully complete what would become her final album and tour.

His memories sound like fond ones. “She was such an interesting person, both as an artist and a person. She was very charming, very fun and intelligent. She was aware of her vocal gifts and the influence she had on the world of music and her place in history. She was a very complicated person. We spent a lot of time together and when you teach a singer, you get quite intimate with that person. It’s not like working on their clothing, makeup or hair — you’re dealing with the very essence of who they are. It becomes a very close relationship.”

Gary prefers to describe his role as a ‘voice builder’ rather than a vocal coach. He explains, “A voice builder is exactly what it says. What I do is build the voice through developing the musculature. Most voice coaches don’t do that. They’re often caught up in this idea of breathing and using your diaphragm, singing from ‘the mask’ (aka the facial region), but literally avoiding the very area where your voice is created, which is the throat. I do the complete opposite; I build the musculature that develops your voice. Whenever you sing, whenever you speak, every aspect of your voice is controlled by muscles. Naturally you want to develop those muscles to improve your singing or your speaking voice. It sounds very simple, but a lot of voice coaches use techniques and concepts that make no sense scientifically or aesthetically, such as performing drills or this bizarre concept of singing the mask or singing through the nasal cavity. People such as Whitney Houston and Frank Sinatra did the complete opposite — they sang with an open throat. So, what I do is build the musculature of your voice and I completely ignore any other aspect of you as a singer.”

Gary goes on to illustrate, “If you work with a physical trainer, he will train you the same way he trains everyone else, building up your bicep or chest muscles. We all share the same anatomy, so that’s the foundation for a system of muscle building that applies to all people, regardless. Singing is always athletic. A singer is an athlete. Once you have that concept in your mind, it all makes sense.”

“Singing is flexing muscles, musically. It’s like a bicep curl in your throat.”

Gary happily torpedoes numerous myths about singing. “When you sing, you don’t use the diaphragm. It’s only used in breathing. And when you breathe out to sing, the diaphragm is totally disengaged. You couldn’t sing from there even if you wanted to, yet you hear that all the time — ‘Sing from your diaphragm!’ It’s all nonsense.” Gary asserts.

“I always say that if you can speak, you can sing. I view singing as a sport. There’s a misconception that singing is some elitist preoccupation for people with musical ability, when in reality it can be learned like any sport. Why is that? Because what controls your voice are muscles, and when you have control of that, and do the proper exercises, you literally can build a singing voice.

“My concept of spreading this idea where the whole world sings together in harmony is a dream come true.” 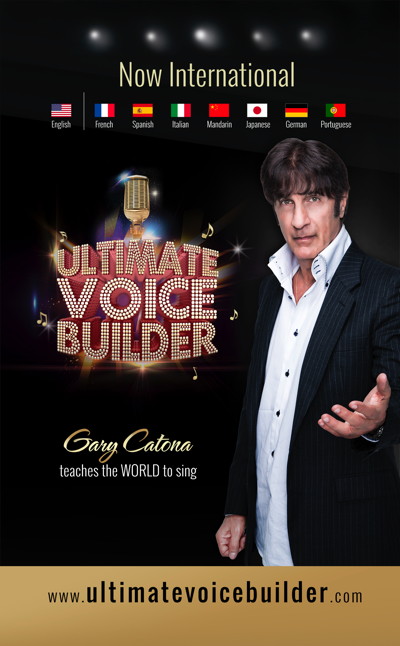 Gary Catona has provided his unique voice building guidance to an impressive array of renowned entertainers who have sought his training to build their singing voice, or overcome vocal disorders such as hoarseness, nasality, and vocal cord paralysis.

Now, for the first time, the identical techniques used by Gary Catona to build the voices of his famous, are available for anyone that would like to raise their voice in song. Gary Catona’s Ultimate Voice Builder is a personal video/workbook program that features Maestro Catona and two of his clients (a male and female for specific programs aimed at men and women) as they demonstrate proven voice techniques designed to build power, resonance, range, and endurance into the voice.  Whether for singing novices or experienced professionals, Gary Catona’s Ultimate Voice Builder is a masterful voice-building program from the master voice builder himself, Gary Catona.  The DVD is priced at $39.95.  More information can be found here.