Remembering Water is a seventy-minute, multi-media performance work featuring newly invented instruments, each created by String Theory. These include Harness Harps and the FIN Harp. Culminating in a new exploration of String Theory’s combining of artistic mediums, the performance is interwoven with dance, original music, projections and their signature giant Harps. Remembering Water is loosely inspired by the photographs of Robert and Shana ParkeHarrison from their book, The Architect’s Brother.

The performance space is transformed by String Theory’s sculptural instruments (their Giant Harps), and is energized by performers with wearable instruments, percussion sculptures, cello, bass, guitar, vocals and electronics. Eleven performers — musicians and contemporary dancers — will take to the stage. 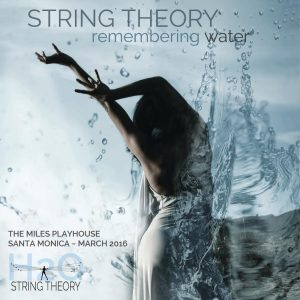 About String Theory:
String Theory is an LA based performance ensemble known for their eclectic cinematic music and their invented sonic sculptures that transform architecture and environments into giant musical instruments. The result is a visually stunning and aurally expansive landscape wherein the performance unfolds. String Theory’s performance resume includes the 66th Emmy Awards, The Grammy’s, Disney Hall, the Ford Amphitheater and extensive tours. You can find their music on feature films like HBO’s documentary “Cat Dancers”, Sony Pictures “Red Sands” and the indie feature “Jean-Michel Basquiat: The Radiant Child.”

At its heart, String Theory is a dynamic rock band with classical flourishes and strong, visceral contemporary dancers. A hybrid of kinetic performance components featuring sonic sculpture, dance and original music. String Theory is an ensemble dedicated to creating innovative performance work. Their signature revolves around a series of large-scale invented instruments that transform spaces into giant musical instruments with strings running hundreds of feet.