A new Kabuki play has been created expressly for the David Copperfield Theatre at MGM Grand, entitled Kabuki Lion Shi-Shi-O: The Adventures of the Mythical Lion.

Panasonic and Shochiku will be presenting Japan KABUKI Festival in Las Vegas 2016 this coming May in Las Vegas, Nevada in succession to the performance that took place in the Fountains of Bellagio in August 2015. The event will be supported once again by MGM Resorts International. A special Kabuki performance “Panasonic presents Wonder KABUKI Spectacle at MGM Grand KABUKI LION SHI-SHI-O: The Adventures of the Mythical Lion” will take place in a theater in Las Vegas, along with yet another exciting fountain show.

Kabuki Lion, a highlight of Japan KABUKI Festival in Las Vegas 2016, will have six performances only, May 3 – 7, 2016.  Tickets start at $55.05 (not including tax and administrative fees); VIP and Premium seats are also available. To purchase tickets, visit the official website here.  More information below.

In August 2015, renowned Kabuki actor, Ichikawa Somegoro starred in an original fountain show that integrated Kabuki, the waterworks of the choreographed fountains, and video projection created by Japan’s leading digital artists — the event was deemed an enormous success.

Now, for May 2016, an original new Kabuki play has been created specially for the David Copperfield Theater in MGM Grand, featuring leading man Ichikawa Somegoro, to be presented in collaboration with technological artwork. Also at the Fountains of Bellagio, in succession to last year’s critically acclaimed performance, a new version incorporating the fountain choreography with video projection will take place. This visual project is sponsored by Panasonic Corporation and several other organizations. Furthermore, with the technical cooperation of Nippon Telegraph and Telephone Corporation, Shochiku Co, Ltd. and the company will research and explore together high tech entertainment. The spatial design and video projection will be created by internationally reknowned media artist groups from Japan: the performance in the theater will be in collaboration with NAKED Inc., and the fountain show will be in continuation to last year’s collaboration, teamLab Inc.

Shochiku presents this unique collaboration between cutting edge technology and traditional Kabuki theater of “Japan KABUKI Festival in Las Vegas 2016,” in a city abundant in exciting entertainment and where people from all over the world visit.

Kabuki Lion features renowned Kabuki actor Ichikawa Somegoro, and integrates new media art with spectacular state of the art projections. The story is based on the legend of a father lion that throws his child into a ravine to test the young lion’s strength through hardship.

Somegoro said, “Kabuki has a history of more than 400 years. It has continued to evolve to this day and maintains a presence as a major form of entertainment in Japan. The theme in the forthcoming festival is ‘Sei-En (Fantastic Shimmer)’ and we will present a fantastic show of scintillating, super entertainment.”

The show incorporates the signature Kabuki elements that have astonished and delighted audiences for centuries: elegant dances, the unique onnagata female role portrayed by a male actor, acrobatic fight scenes, the lion’s robust and spirited movements, lavish costumes and makeup, and many other treasures of this traditional Japanese theatrical art.

The story is told against a backdrop of state of the art video projections created by leading Japanese creative media artists.

The story of Kabuki Lion takes place at Mount Seiryo — an ethereal Buddhist location where the gods live.  Shi-Shi-O serves Monju, the Buddhist deity of spiritual wisdom. Shi-Shi-O’s children will be celebrating their coming of age soon but before this rite of passage, he sends them on a mission. They must defeat a mythical creature that is said to be the dark-side of the human heart, and to return the treasured sword Shi-Shi-Maru that was stolen from Monju. The brave brothers descend from the stone bridge to the netherworld.  They disguise themselves as humans and courageously fight the creature, and upon their victory, return to Mount Seiryo. Monju validates the young brother lions’ coming of age and the shishi-lions celebrate gloriously. 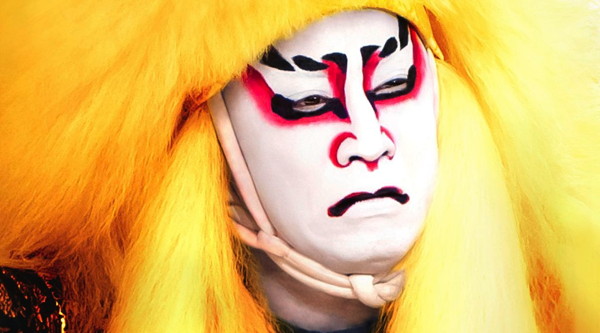 Kabuki Lion Shi-Shi-O: The Adventures of the Mythical Lion.

As part of the festival, Panasonic presents “Water Screen Digital Show by Shochiku x teamLab” performs at the Fountains of Bellagio at the Bellagio Hotel from April 29 to May 7, with four shows daily – 8:00 pm, 9:00 pm, 10:00 pm and 11:00 pm.  The show is free to the public.

The first part is a story told in a beautiful and dynamic presentation, which employs hologram images, includes scenes from the famous battle of samurais projected onto a screen of water, splashing up from the famous fountain in front of The Bellagio.

In Japan, Children’s Day is in May, and the carp is a symbol of a child’s growth and success in life.  A collaborative fishing game can be played during the second part of the show in which participants download a game app onto their smart phones and use it like a fishing reel, teaming up with other participants, to catch a variety of fishes.  It will be fun just to watch the show, but also participate by catching a carp, and bring home a piece of Japanese culture.  The game app is available soon on iTunes and Google Play, created by teamLab Inc.

The producers are grateful for the support of the Consulate-General of Japan in San Francisco, US Japanese government institutions and organizations related to international cooperation.  They would like to introduce Japan and Japan’s traditional culture and the latest technology to the world by working hand in hand with various organizations and companies that have provided support and cooperation for this performance and for the producers’ on-going efforts.

Supported by Consulate-General of Japan in San Francisco

With the special support and technical cooperation of:

With the technical cooperation of:

With the support of:

Kabuki is a traditional Japanese form of theater with roots tracing back to the beginning of the 17th century. It is recognized as one of Japan’s three major classical theater styles, along with Noh and Bunraku.

Kabuki is an art form rich in showmanship. It involves elaborately designed costumes, eye-catching make-up, outlandish wigs, and arguably most importantly, the exaggerated actions performed by the actors. The highly-stylized movements serve to convey meaning to the audience; this is especially important since an old-fashioned form of Japanese is typically used, which is difficult even for Japanese people to fully understand.

The unique design of the kabuki theater allows the use of dynamic stage sets utilizing revolving platforms and lifts for prompt changing of a scene or trapdoors for appearance/disappearance of actors.

Another specialty of the kabuki stage is an extended stage (hanacmichi) that leads through the audience, allowing for a dramatic entrance or exit. Ambiance is aided with live music performed using traditional instruments. These elements combine to produce a visually stunning and captivating performance.

As there are no women performing on the Kabuki stage, specialists in female roles are one of the most remarkable features of this theatre. They are called onnagata. Many people, from Japan and from abroad, marvel at the skill of these actors who have trained for many years to perfect this art. But they are not just imitating real women. The onnagata is a special theatrical creation based on artistic convention that has developed over hundreds of years.