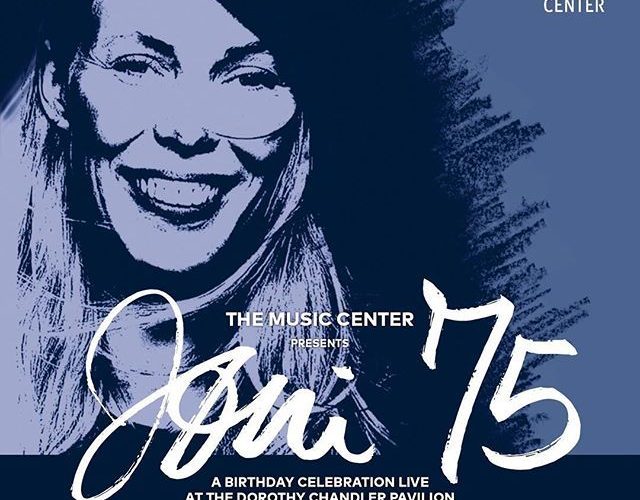 JONI 75: A Birthday Celebration for Joni Mitchell – Live at the Dorothy Chandler Pavilion 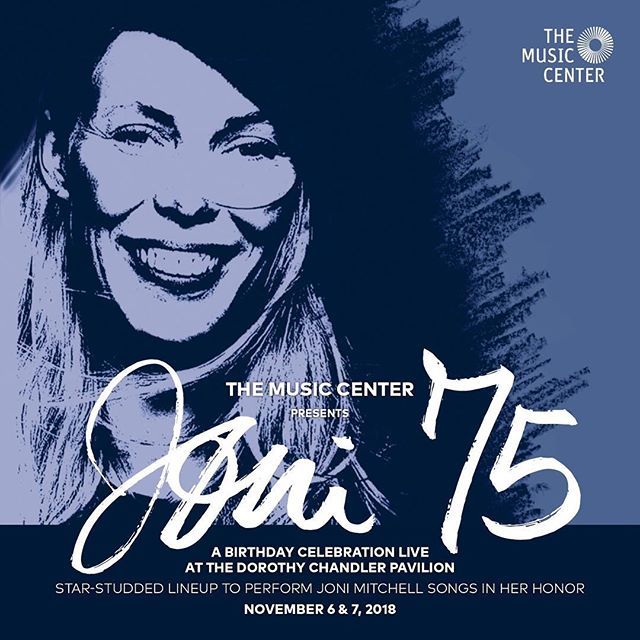 Musical icon of the sixties and seventies, Canadian-born singer-songwriter Joni Mitchell draws from folk, pop, rock, and jazz to craft her singular compositions. Mitchell’s songs often reflect social and environmental ideals as well as her feelings about romance, confusion, disillusionment, and joy. Throughout an illustrious and influential career, Mitchell has received numerous accolades, including nine Grammy Awards. Rolling Stone called her “one of the greatest songwriters ever.”

The Music Center has announced two star-studded concerts, JONI 75: A Birthday Celebration Live at the Dorothy Chandler Pavilion on November 6 and November 7, 2018, featuring an incredible array of singers and musicians who will honor one of the world’s most remarkable artists, Joni Mitchell, on her 75th birthday.

A music icon whose work continues to inspire generations of artists, Mitchell performed on the Dorothy Chandler Pavilion stage in 1972 and 1974, with the Los Angeles Times describing her 1972 concert as “Joni Mitchell in a Giant Living Room.”  “Our upcoming concerts will mark the return of Joni Mitchell’s masterful music to The Music Center, creating both an intimate ‘living room’ experience and a joyous celebration of her tremendous career,” said Rachel Moore, The Music Center’s president and CEO.

With nine Grammy® awards to her name and 16 Grammy nominations, Mitchell’s catalogue of music spans more than five decades.  In 2017, Mitchell’s 1971 album Blue was named number one on National Public Radio’s list of the 150 greatest albums made by women.  Her work has no boundaries and crosses genres from Folk and Pop, to Jazz and World Music.  Mitchell is also a prolific painter and was once quoted as saying, “I’m a painter first, and a musician second.”  While Mitchell hails from Canada, she has called Los Angeles home for decades.

The Music Center’s Artistic Advisor Jorn Weisbrodt is the creator of the two evenings, and Danny Kapilian is the music producer.

“Joni Mitchell’s songs create sublime paintings of the landscape of human emotions and the mind,” Weisbrodt said.  “Her view is that of the bird and of the surgeon.  There is an unprecedented marriage of intimacy and universality that permeates all of her work.  Her art compares to no other, but relates to all of us.  A pioneer and builder of her very own tower of song, Joni is a wanderer and a searcher, someone who did not rest but always moved forward, exploring new territory and inviting her audiences to travel on new trails with her.  It has been the joy, privilege and honor of my life to develop these evenings for her and consult with her on this voyage.  I cannot wait for her and all her friends to experience the magic that everyone on and behind the stage is going to create with her songs,” Weisbrodt offered.

Settling in Los Angeles with her guitar and inimitable voice, Mitchell produced a series of albums unmatched by any songwriter, including Blue, Ladies of the Canyon, The Hissing of Summer Lawns, Hejira, Mingus, Travelogue, and many more.

Los Lobos’ Steve Berlin said, “Joni Mitchell is a true iconoclast and has long been an inspiration for us.  Her unwavering commitment to expanding her musical vocabulary is something that we’ve tried to do as a band so it’s a huge honor to be part of her 75th birthday celebration.”

“Joni Mitchell’s musical adventure is certainly great, but the more I get to know her as a person, the more I am amazed by the woman herself,” explained Rufus Wainwright.  “When in her presence, the day dissolves and one glimpses something beyond, something very far away, yet oddly more concrete.  Everything about her is oraculous.  I’m so very honored to be part of her 75th birthday celebration.”

“I am very pleased to take part in these concerts honoring my friend Joni, without doubt one of the greatest writers we have,” said Graham Nash.

Seal said, “Joni is the reason I became a musician, so the opportunity to take part in this means everything to me.”

Online and Phone for Concert Tickets:

JONI 75: A Birthday Celebration Live at the Dorothy Chandler Pavilion will feature musical performers who range from Mitchell’s contemporaries to the next generation of artists who have been influenced and inspired by her work.  They include*:

Dedicated to Joni Mitchell, The Music Center’s Soirée: JONI 75 will celebrate her 75th birthday with an exclusive party in the Eva and Marc Stern Grand Hall at the Dorothy Chandler Pavilion immediately following the November 7, 2018 concert.  Guests will have the opportunity to commemorate Mitchell’s birthday in grand style at a special event that will include a post-performance dinner and special surprises.  According to Moore, The Music Center’s Soirée: JONI 75 will salute Mitchell’s many talents and her artistic contributions, which continue to inspire countless other artists.  “Joni Mitchell epitomizes The Music Center’s belief in the power of the arts to transform lives,” Moore said.  “We are privileged to celebrate her 75th birthday and hold our gala in her honor and to present her with The Music Center’s Excellence in the Performing Arts Award for her innumerable contributions and her role as an inspiration to the artists of today and tomorrow,” Moore added.

Proceeds from the event will benefit The Music Center’s programs.  Those funds will help The Music Center provide access to the performing arts to new and diverse audiences through nationally recognized arts education programs, world-class dance presentations that inspire and enchant audiences, and free and low-cost community programming that reaches across boundaries of age, race, ethnicity, gender and beyond.  The event features an unprecedented collaboration of the board leaders of The Music Center, its resident companies – Center Theatre Group, the Los Angeles Master Chorale, LA Opera and LA Phil – and Music Center support group Center Dance Arts, who are coming together to co-chair the gala to honor one of the world’s most influential artists.  The evening’s co-chairs are Kiki and David Gindler, Barbara and Jay Rasulo, Catharine and Jeffrey Soros, Lisa Specht, Eva and Marc Stern and Phil A. Swan.

Single tickets to the JONI 75: A Birthday Celebration Live at the Dorothy Chandler Pavilion concerts on November 6 and 7, 2018, start at $45 and are available at The Music Center’s Dorothy Chandler Pavilion Box Office, 135 Grand Avenue, Los Angeles, CA 90012; by calling (213) 972-0711; and online at musiccenter.org/joni.   Special packages, including prime seats for the November 7, 2018 concert and gala dinner, are available by calling (213) 972-4322 and online at musiccenter.org/joni75soiree.

About The Music Center
The Music Center is Los Angeles’ home to the world’s greatest artistic programs and events with four iconic theatres and an outdoor plaza.  In addition to its four-renowned resident companies – Center Theatre Group, the Los Angeles Master Chorale, LA Opera and LA Phil – The Music Center presents an international dance series, free and low-cost public programming and special events and activities for all ages.  From its early days, The Music Center has been a pioneer in arts education and offers a multi-faceted program from K-12.  With The Music Center On Location,™ the non-profit performing arts organization brings programming to locations outside of its Downtown Los Angeles campus.  The Music Center also programs and manages Grand Park, a 12-acre adjacent greenspace, with year-round free programming.  For more information, visit musicenter.org.  Follow The Music Center on Twitter and Instagram @MusicCenterLA and on Facebook at facebook.com/musiccenterla.