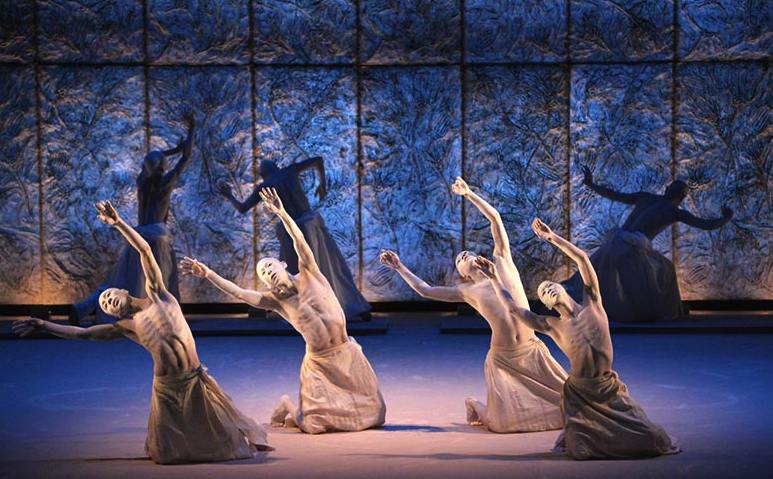 All photos courtesy of Sankai Juku.

Meguri is a meditative visual poem by Ushio Amagatsu, Sankai Juku’s acclaimed artistic director, that reflects on the passage of time through imagery and movement inspired by the ebb and flow of water, and the cycle of the earth’s seasons.

UCLA’s Center for the Art of Performance (CAP UCLA) presents

A much-anticipated event in the North American dance landscape, Sankai Juku will return to Royce Hall with Ushio Amagatsu’s latest work, Meguri: Teeming Sea Tranquil Land. Ushio Amagatsu and his all-male, Tokyo-based company are known for their elegance, technical precision and emotional depth. This beautiful new work is a poetic meditation on the passage of time as symbolized by the circulation of water and the seasonal transformation of the earth. Sankai Juku premiered Meguri: Teeming Sea, Tranquil Land at the Kitakyushu Performing Arts Center in Fukuoka, Japan in March of 2015.

Amagastu describes the meaning of Meguri as “… a phenomenon like circulating water and all things that rotate.” Set against an upstage relief of sea lily fossils, Meguri: Teeming Sea, Tranquil Land is a meditative visual poem.  The term “Butoh” means “dance of darkness.”

Funds for Sankai Juku Meguri were provided in part by the Japan Foundation Los Angeles and the Doris Duke Charitable Foundation Endowment Fund.

Butoh Discussion
Sat, Oct 12, 2019, 11:30am
Center for Arts and Religion, Doug Adams Gallery (2365 LeConte Avenue, Berkeley)
Panel discussion on the elements that inform Sankai Juku’s work, including contemporary dance; Japanese traditional dance, culture, and history; and the natural world. Presented in association with the Graduate Theological Union and the UC Berkeley Dept. of Theater, Dance and Performance Studies. Free and open to the public. RSVP requested.

Major support for public programs provided by Bank of America.

Amagatsu also works independently outside Sankai Juku. In 1988 he created Fushi on the invitation of Jacob’s Pillow Foundation, in the U.S., with music by Philip Glass. In 1989, he was appointed as Artistic Director of the Spiral Hall where he directed Apocalypse (1989), and Fifth-V (1990). In February 1997, he directed Bluebeard’s Castle by Bartok conducted by Peter Eötvös at Tokyo International Forum. In March 1998, at Opéra National de Lyon, France, he directed Peter Eötvös’s opera Three Sisters (world premiere), which received “Prix du Syndicat National de la Critique, France.” Three Sisters has been seen in the 2001-2002 season at Théâtre du Châtelet in Paris, at Théâtre Royal de la Monnaie in Brussels, at Opéra National de Lyon, and at Wiener Festwochen 2002 in Austria. In March 2008, Amagatsu directed Lady Sarashina, Peter Eötvös’s opera at Opéra National de Lyon (world premiere). Lady Sarashina again received “Prix du Syndicat National de la Critique, France” and it was seen at Opéra Comique in February 2009 and in Teatr Wielki, Polish National Opera, in Warsaw in April 2013.

Sankai Juku is a Butoh dance company, founded by Ushio Amagatsu in 1975. It has toured internationally since 1980, and premieres a new piece approximately once every two years at Théâtre de la Ville, Paris, the center of the contemporary dance of the world. It is one of the few dance companies that Théâtre de la Ville, Paris has commissioned continuously for more than 35 years.
Since its first world tour in 1980, it has performed in over 700 cities in 48 countries throughout Europe, North, Middle, and South Americas, Asia, and Oceania. It has been highly praised in different cultures for over 35 years, which itself shows the universal nature of its work. Crossing over several geographical borders as well as the generations, its work has reached to an original form of aesthetics that brings the audience to grasp her/his inner movement. By performing for the audience from different backgrounds, it has continuously been developing its theme, and searching for, and moving toward a new realm.

UCLA’s Center for the Art of Performance (CAP UCLA) is dedicated to the advancement of the contemporary performing arts in all disciplines — dance, music, spoken word, and theater, as well as emerging digital, collaborative and cross-platforms — by leading artists from around the globe. Part of UCLA’s School of the Arts and Architecture, CAP UCLA curates and facilitates direct exposure to artists who are creating extraordinary works of art and fosters a vibrant learning community both on and off the UCLA campus. The organization invests in the creative process by providing artists with financial backing and time to experiment and expand their practices through strategic partnerships and collaborations. As an influential voice within the local, national and global art communities, CAP UCLA connects this generation to the next in order to preserve a living archive of our culture. CAP UCLA is also a safe harbor where cultural expression and artistic exploration can thrive, giving audiences the opportunity to experience real life through characters and stories on stage, and giving artists an avenue to challenge assumptions and advance new ways of seeing and understanding the world we live in now.