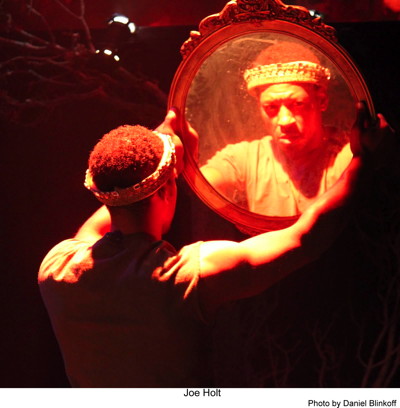 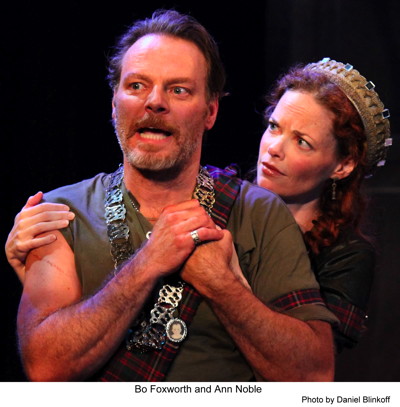 In Shakespeare’s macabre and unsettling tragedy, a ruthlessly ambitious Scottish general seizes the throne with the help of his scheming wife and guidance from a trio of witches. He then commits further murders to maintain a tenuous grip on his newly won power.

Adopting an unusual approach, director Jessica Kubzansky opens her production of Shakespeare’s Macbeth, now running at the Antaeus classical theater Company, with a scene not scripted by The Bard. We witness a somber tableaux vivant; basically a mute sequence depicting a funeral for the Macbeth’s deceased baby. This prologue is followed by a brief scene between Hecate (Kitty Swink, who also plays Lady MacDuff) and the three witches (Fran Bennett, Susan Boyd Joyce and Elizabeth Swain) that pre-empts the play’s usual first scene where the trio of weird sisters waylays Macbeth on the heath. (This scene was lifted from later in the play and brought to the top.)

In the fully double-cast production Bo Foxworth and Ann Noble lead “The Kinsmen” cast as Macbeth and his Lady while Rob Nagle and Tessa Auberjonois lead  “The Thanes”  cast.

Slightly shifting the emphasis, we now see Macbeth succumbing to a predestined and hellish temptation, unexpectedly offered by the witches Macbeth in the moment of intoxication of his recent battlefield victory and subsequent accolades.

It’s an intriguing approach, and one well supported by the text. Suddenly certain lines leap out with new significance. Lady M’s grim admission that she would rip a suckling baby from her breast and murder her babe if Macbeth chose not to proceed.

I have given suck, and know
How tender ‘tis to love the babe that milks me:
I would, while it was smiling in my face,
Have pluck’d my nipple from his boneless gums,
And dash’d the brains out, had I so sworn as you
Have done to this.

Importantly, in communing with the dark side of nature and denizens from the world of spirits, Macbeth sets himself on a fateful path to destruction.

This is a savage tale of Scottish legends, witches, hallucinations and bold and bloody grab for power. Both giving brilliant performances, Bo Foxworth and Ann Noble also bring a nervousness and uncertainty to their devious plotting. The witches’ baleful presence oversees all the evil deeds throughout the drama, sometimes on high ledge upstage above Tom Buderwitz’ gloomy set of bare trees, boulders and doorways to dark corridors. The production seems unevenly cast, with some actors shining while other, more incidental characters failing to impress.

Above is a review of “The Kinsmen” cast.

Approximately 3 hours, including a 10 minute intermission

Audience members are invited to stay after the performance to ask questions and discuss the play with various cast members.