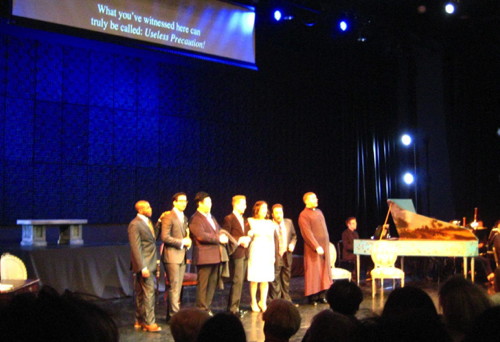 LA Opera’s season-long Figaro Unbound tribute to the characters created by French playwright Pierre Beaumarchais is drawing to a close, but its latest event is among the most interesting in the season long program: Giovanni Paisiello’s seldom performed version of The Barber of Seville.

The Barber of Seville was the first of three plays by Beaumarchais devoted to the character of Figaro and his fellow citizens of Seville. Across Figaro Unbound, LA Opera has presented operatic adaptations by Corigliano, Rossini and Mozart. Saverio Mercadante’s opera The Two Figaros was done by UCLA as part of the program.

Now we come to Paisiello’s version of The Barber of Seville, performed by artists of the LA Opera Domingo-Colburn Young Artists Program and the USC Thornton School of Music Orchestra under the direction of LA Opera Music Director James Conlon.

In his pre-performance discussion of the opera, Maestro Conlon told how Paisiello’s Barber of Seville was a significant force in his decision to pursue a career in music.  That affection for the score came through in this performance.  He had actually conducted the work once before, nearly forty years ago and said he hoped that after tonight he hoped he would be able to conduct the work again sometime. Let’s hope it’s not another forty years in the future!  We can all hope for the same: This was a lovely performance of a once popular work that is worth hearing.  Here at ArtsBeatLA we outlined the history of Paisiello’s opera a few weeks ago in a previously published post.

It’s the same story we know from Rossini’s now more famous version. The Count Almaviva has fallen in love with the beautiful Rosina and now he wants to marry her. Rosina, a wealthy orphan, is under the guardianship of the creepy old Doctor Bartolo, who wants to marry the girl himself and struggles to keep the Count away from her with the help of the greedy priest/music master Don Basilio. Almaviva, with the help of the resourceful jack-of-all-trades Figaro, woos Rosina, wins her heart and marries her despite the efforts of Bartolo. A happy ending ensues for the young couple, at least until the bump in the road that occurs a few years later in the sequel, The Marriage of Figaro.

Paisiello’s Barber is full of beautiful, very tuneful classical music, more graceful and less rambunctious than Rossini’s more familiar score. The performance was clearly a labor of love. The small student orchestra played commendably under Maestro Conlon’s direction. The singers, most of them members of the LA Opera’s Domingo-Colburn Young Artists Program, were even better.  Tenor Brenton Ryan was a good Almaviva, well partnered by Kathleen Giaquinto’s minx of a Rosina. Their performance together of the singing lesson in Act 2 was funny, aided and abetted by baritone E. Scott Levin as Doctor Bartolo who was a scene stealer in the buffo tradition. Nicholas Brownlee, a 2015 winner of the Metropolitan Opera National Council Auditions, was an excellent Don Basilio and baritone Kihun Yoon, an outstanding Figaro, with a rich and resonant voice and deft comic timing.

Saturday’s performance was the second of two which took place at Caroline’s Loft, a small performing space on the campus of Cal State Los Angeles. The opera was presented semi-staged, basically a bare stage with a few pieces of furniture for props. The orchestra, a harpsichord and Maestro Conlon were placed along the far end of the performing area. The costumes were confined to modern dress – suits for Figaro and Doctor Bartolo, a dress for Rosina, a cassock for Don Basilio. Since the Count adopts a variety of disguises in his attempts to infiltrate the Bartolo household and get to Rosina, he changed costumes several times. Ingeniously, he wore a Cal State LA hoodie while disguised as poor student Lindoro, an army camouflage uniform while playing a drunken soldier, and another cassock with badly repaired glasses while trying to slip in disguises as an annoying colleague of Don Basilio’s. The cast used these simple elements very effectively to convey the story.

Performances such as this are a reminder that there is a lot of good musical entertainment available around Los Angeles, sometimes to be found off the beaten path. Small scale, unorthodox performances like this one permits audiences to hear works outside the standard repertoire that are no less worthy of the attention than the more familiar (and more commonly staged) works.

Bravi to all involved!