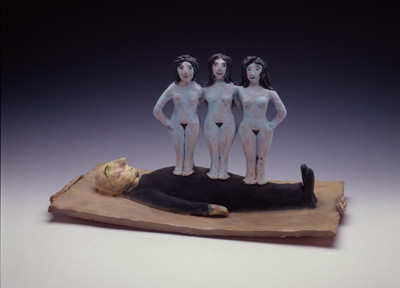 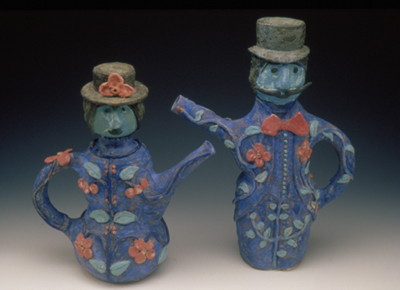 This Friday, September 9th, there will be an opening reception at the Santa Monica Museum of Art (SMMoA) at Bergamot Station of a vast exhibition entitled Beatrice Wood: Career Woman—Drawings, Paintings, Vessels, and Objects.

Co-curated by SMMoA Executive Director Elsa Longhauser and Deputy Director Lisa Melandri, this comprehensive exhibition and lecture series will offer a scholarly, commemorative evaluation of as well as a comprehensive survey and a new assessment of Beatrice Wood, an emblematic California artist whose extraordinary life and career traversed and contributed to the cultural and artistic highlights of the entire 20th century.

Beatrice Wood: Career Woman is part of Pacific Standard Time: Art in L.A. 1945–1980. This unprecedented collaboration, initiated by the Getty, brings together more than sixty cultural institutions from across Southern California for six months beginning October 2011 to tell the story of the birth of the L.A. art scene. An artist who worked on both the East and West coasts and bridged gaps between areas as disparate as New York Dada and Southern California ceramics, Wood (1893–1998) was a vital contributor to the art scene of the period and is thus a key player in the Pacific Standard Time project. 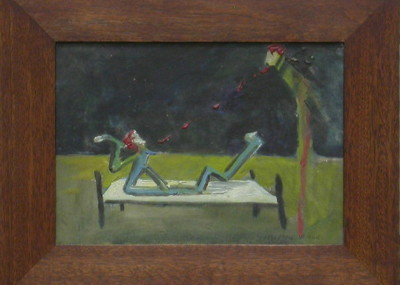 Beatrice Wood: Career Woman will include over 100 works of art. The exhibition will begin with Wood’s early Dada work, which includes drawings, paintings, posters, prints, and illustrated albums and travelogues. Wood first encountered Dada—a primary creative and personal influence—in New York, arising from her intimate friendships with Marcel Duchamp and the collectors Walter and Louise Arensberg. It was Dada that first inspired Wood to become an artist, and it shaped her creative thinking for the rest of her life. The exhibition will then go on to feature prominent examples of Wood’s ceramics created from the 1940s until her death in 1998. Wood was exceptionally prolific, even given her remarkable longevity. She repeatedly investigated and revisited a number of subjects, forms, and materials over a 60- to 70-year period.

Though Wood did not turn to ceramics until 1933 at the age of 40, she became an accomplished clay artist and went on to produce some of her most notable works well into her 90s. Her experimentation with ceramic glazing and firing was extraordinary, a compendium of clay technique. She first began to experiment with clay pieces that took the form of tiles or plates. By the 1980s, Wood was creating objects on a much larger scale, such as colossal goblets more than a foot tall and wide. The exhibition will survey the full range of her ceramics—from the miniature to the large-scale, from the utilitarian to the decorative, and from the vessel to figures, scenes, and tableaux.

A fully-illustrated, scholarly catalogue will accompany the exhibition. Dada scholar and independent curator Francis Naumann and Marie T. Keller will edit, annotate, and illustrate excerpts from the Diary of Beatrice Wood. Using this primary source material, Naumann will investigate Wood’s artistic production in historical context, and in the process publish parts of her diary for the first time. Jennifer Sorkin, Assistant Professor of Art History and Critical Studies at the University of Houston, will explore the role Wood played in the Dada movement and how this involvement affected her artistic development. She also will examine Wood’s exploitation of her own sexuality and how this attitude affected the creation of her artistic persona. Clay scholar Garth Clark will catalogue Wood’s evolution as a potter, specifically focusing on her later period, which features evolving scale in both figurative and functional ceramics. He will contextualize Wood’s ceramic work within the era’s artistic milieu. Kathleen Pyne, Associate Professor of Art History at University of Notre Dame, will investigate the diverse aspects of California spirituality from the 1920s to the 1950s, examining its impact on modernists in general, and Beatrice Wood in particular.

Wood created a complex, thoughtful, and inexhaustible oeuvre, one that is equal parts narrative and form, equal parts poetry and wit. Her irrepressible sensibility could be bold, audacious, insouciant, sexually charged, and at times biographical. This exhibition will honor Wood’s indomitable spirit and dynamic artistic force, a pairing that produced a mature body of work that defines her importance as an artist.

The Beatrice Wood: Career Woman exhibition and publication are made possible by lead grants from the Getty Foundation. Generous support has also been provided by the LLWW Foundation and by Rosa and Bob Sinnott. Additional support has been given by The Bluhm Family Foundation; Julie Chapgier and Brian Biel; the Frederick R. Weisman Art Foundation; Susie and Jaime Gesundheit; the Kayne Foundation; Ric & Suzanne Kayne and Jenni, Maggie & Saree; the Pasadena Art Alliance; Brenda R. Potter; and Richard L. Menschel.

LECTURE: Not the Mama of Dada: Beatrice Wood’s Early Career in the Arts in New York, by Francis Naumann

Dada Scholar Francis Naumann will trace Wood’s early artistic career and involvement with the New York Dada group. Through a discussion of her activities in New York theater and her important relationships with Avant-garde collectors Walter and Louise Arensberg, artist Marcel Duchamp, writer and diplomat Henri Roché, and others, Naumann will describe the formative experiences that led to the creation of Wood’s artistic persona.

To RSVP for a place at this lecture, please email [email protected] with the subject line ‘Not the Mama of Dada’

In the twilight of their years, Beatrice Wood (1893–1998) and Louise Bourgeois (1911-2010) remained highly influential, continuously regarded as proto-feminist mentors and iconoclasts. Independent scholar and critic Jenni Sorkin offers a feminist re-reading of Wood’s and Bourgeois’ performance and artistic persona and the role these traits played in their performance-driven object making.

To RSVP for a place at this lecture, please email [email protected] with the subject line ‘Wood and Bourgeois’ 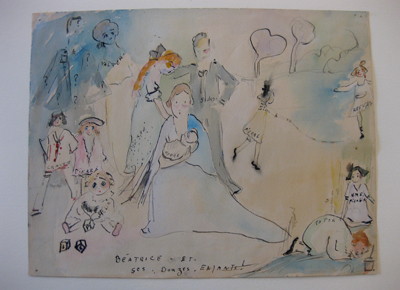 About Pacific Standard Time: Art in L.A. 1945 – 1980
Pacific Standard Time is a collaboration of more than sixty cultural institutions across Southern California, coming together for six months beginning in October 2011 to tell the story of the birth of the Los Angeles art scene and how it became a major new force in the art world. Each institution will make its own contribution to this grand-scale story of artistic innovation and social change, told through a multitude of simultaneous exhibitions and programs. Exploring and celebrating the significance of the crucial post-World War II years through the tumultuous period of the 1960s and 70s, Pacific Standard Time encompasses developments from L.A. Pop to post-minimalism; from modernist architecture and design to multi-media installations; from the films of the African American L.A. Rebellion to the feminist activities of the Woman’s Building; from ceramics to Chicano performance art; and from Japanese American design to the pioneering work of artists’ collectives. Initiated through $10 million in grants from the Getty Foundation, Pacific Standard Time involves cultural institutions of every size and character across Southern California, from Greater Los Angeles to San Diego and Santa Barbara to Palm Springs.