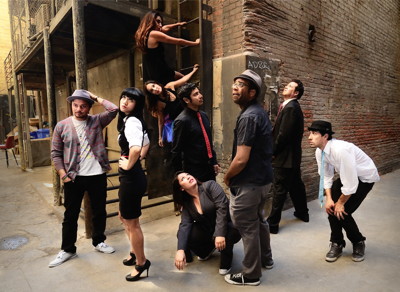 Embrace the mystery of Downtown LA. When a prominent real estate developer ends up dead, a cache of stories is discovered immersed deep in the heart of Downtown Los Angeles. From the mouths, eyes and ears of business owners, loft dwellers, baristas, food vendors and street people, an intricate world unfolds in the quest for the answer to the question: Who killed Ron Dillinger?

That’s the plot of The Vault: Unlocked, an original multi-disciplinary theatrical show at based on several true stories of Downtown residents. The show will have a limited engagement at The Los Angeles Theatre Center, running until October 8th.

In the words of musical director and Jasmine Orpilla, “The Vault is a rebellious, genre-bending theatre and musical performance art ensemble. Continually inspired by local L.A. and global real-life happenings, this multi-cultural and interdisciplinary ensemble creates an unpredictably fast-paced experience where no issue is taboo… except for our mothers.”

The Vault is theatre, performance art and cabaret – all of these things simultaneously.  Returning to Los Angeles Theatre Center, The Vault, with a multi-ethnic composition that reflects the diversity of its immediate surroundings, conveys a youthful sensibility that establishes it as Downtown’s Own.