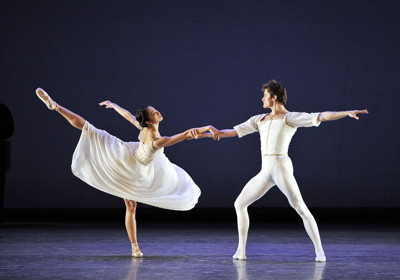 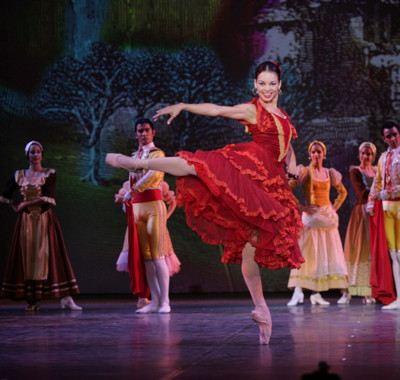 Glorya Kaufman Presents Dance at the Music Center announces the eighth season of this international dance series.  Seven companies representing the United States, Spain, Brazil, the Netherlands, and Cuba, will participate in 32 performances at the Dorothy Chandler Pavilion and Ahmanson Theatre, in a season that is the largest and most culturally diverse in the history of the series.

Renae Williams Niles, Director of Dance Presentations said, “This is definitely a season of many firsts including the Center debuts of Angel’s Corella Ballet Castilla y León, Grupo Corpo and Ballet Nacional de Cuba, which I hope reflects the continued growth of the series. It is with Glorya Kaufman’s significant support and the ongoing commitment of the Center’s board and our many dance donors, this season is possible.

I am overjoyed to be collaborating for the first time with the LA Opera for a landmark masterwork by Mark Morris. A dance piece set to a concert work by George Frideric Handel for soloists, chorus and orchestra, L’Allegro, Il Penseroso ed il Moderato will feature the Los Angeles Opera Orchestra and Chorus as well as a quartet of world-class singers: sopranos Hei-Kyung Hong and Sarah Coburn, tenor Barry Banks and bass-baritone John Relyea. The season will conclude with American Ballet Theatre’s eighteenth appearance at the Music Center and I’m ecstatic to present a work by Alexei Ratmansky the company’s Artist in Residence.  He joined ABT in January of last year, after leaving the Bolshoi Ballet as its artistic director.

This season also includes the return of Alvin Ailey American Dance Theater.  Every time we present Ailey we have played to larger audiences clamoring for more, so this season we will offer one more program than we have had previously, and will have performances over two weekends.

This will also be Ailey’s final appearance in Los Angeles under the esteemed direction of Judith Jamison.  Just a couple of weeks ago, the company announced Robert Battle as the Artistic Director Designate and he will assume the Artistic Director position on July 1, 2011; at that time Ms. Jamison will assume Emerita status and I am sure will continue to play a significant leadership role in the dance world.”

The season begins in the Ahmanson Theatre with Spain’s only classical ballet company, Corella Ballet Castilla y León November 5, 6, and 7, 2010.  This two-year old company, lead by premiere dancer Angel Corella, will make its first West Coast appearance in the Dance at the Music Center series.  The company first began with a rehearsal process on April 1, 2008, in response to Corella’s aspiration to provide professional careers for classical dancers in Spain. Corella also wanted to provide a way for Spanish born dancers to be able to stay in Spain and prevent them from having to leave the country to further their careers, as he and many others have done for the past 20 years. Corella Ballet Castilla y León offers a wide repertoire, incorporating classical, neoclassical and contemporary choreography, and is the only classical ballet company in Spain. 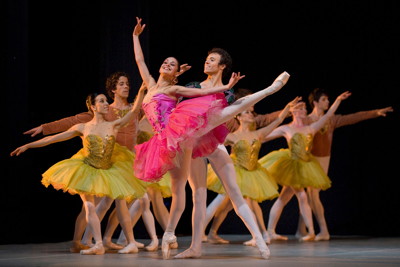 The balance of the season will be performed at the Dorothy Chandler Pavilion, beginning with the contemporary Brazilian dance company, Grupo Corpo, January 28, 29 and 30, 2011.  Founded in 1975, this company combines classical technique with a contemporary re-reading of popular Brazilian dance forms – challenging audiences’ perceptions of ballet and modern dance.

Nederlands Dans Theater, under the artistic direction of Jim Vincent, will perform March 23 and 24.

Since its inception in 1959, more than half a century ago, Nederlands Dans Theater (NDT) has been among the most prominent and innovative contemporary dance companies in the world. NDT’s dancers display virtuosity and unparalleled expression while performing a challenging repertoire; the company performs much-praised works by house choreographers Jiří Kylián and Lightfoot León, as well as new creations by established choreographers and upcoming talent from inside and outside the company.

Jim Vincent danced for NDT from 1978 to 1990.  After working in Europe for ten years, Vincent became artistic director of Hubbard Street Dance Chicago, returning to NDT in 2009 as artistic director.

Alvin Ailey American Dance Theater is one of the most popular dance companies to regularly perform in this series.  To satisfy the demand for tickets and programming, the company will have four different programs, over ten performances this season from April 8 to 17, 2011 at the Pavilion.

Recognized by U.S. Congressional resolution as a vital American “Cultural Ambassador to the World,” the Company has performed for an estimated 23 million people in 48 states and in 71 countries on six continents, celebrating the uniqueness of the African-American cultural experience and the preservation and enrichment of the American modern dance tradition.  The Ailey Company is home to some of the most glorious dancers, virtuosic talent, and beloved dance works in the world.  In addition to premieres and new productions, the performances will celebrate 50 years of Revelations, an enduring classic and a “must-see” for all people that has inspired more audiences around the globe than any other modern dance.

For the first time since October 2007, Mark Morris Dance Group returns to the series in an artistic collaboration with LA Opera with the landmark work L’Allegro, il Penseroso ed il Moderato, choreographed by Mark Morris to the music of George Frideric Handel, performed May 5-10, 2011. The score will be performed by internationally acclaimed vocal soloists as well as the Los Angeles Opera Orchestra and Chorus.

L’Allegro, il Penseroso ed il Moderato was Mark Morris’s premiere dance as Director of Dance at the Théâtre Royal de la Monnaie in Brussels, Belgium, where the company was in residence for three years.  Writing about the work in 2005, John Rockwell in the New York Times said, “When it was born in 1988, it was recognized as Mark Morris’ masterpiece.  Seventeen years later, it still is, by pretty much everybody … ‘a ‘Nutcracker’ for adults or a ‘Messiah’ for the secular…  Anyone who cares about dance, or wants to see one of the cornerstones of late-20th century choreography, or just wants to be wafted on a wave of musical and terpsichorean beauty, should try to get a ticket. One thing that makes it so beguiling is its range of images and emotions, the way it captures all of human feeling and an entire social order in a pastoral setting.  Here, Morris makes magic.  Go see for yourself.”

To date, it has been performed at 21 venues in 18 cities and nine countries on three continents. This summer, performances of L’Allegro at the Mostly Mozart Festival at Lincoln Center will kick off Mark Morris Dance Group’s 30th Anniversary season.  The scenery for L’Allegro, il Penseroso ed il Moderato is by Adrianne Lobel, costumes are by Christine Van Loon, and lighting is by James F. Ingalls.

Ballet Nacional de Cuba will bring their critically acclaimed Don Quixote, with live music performed by the LA Opera Orchestra, to the Dorothy Chandler Pavilion June 23 to 26.  Formed in 1948 by Alicia Alonso, the company occupies a prominent place in Hispanic and international ballet culture. This tiny island has produced one of the foremost schools of ballet, training all the remarkable dancers of the company. It is extraordinary that Alonso produced this quality in only sixty-two years.

Alonso premiered this version of Don Quixote in 1988, after studying the staging of other companies and being inspired by this masterpiece of Spanish literature. Alonso also brought to Don Quixote her influences from her history with American Ballet Theatre, where she was a prima ballerina from 1943 until she formed Ballet Nacional de Cuba, as well as the influences of George Balanchine (Theme and Variations was originally set on her.)

Anna Kisselgoff in the New York Times said, “Those looking for passion, Latin or otherwise, will find it – but most of all they will see the classical dancing, even academic precision … this Don Quixote is typical of the company because it filled with dramatic motivation … the production keeps the standard choreography in the set pieces, but much of the ensemble choreography is new and more classical.”

Recognized as one of the great dance companies in the world, American Ballet Theatre, under the Artistic Direction of Kevin McKenzie, will give five performances of Alexei Ratmansky’s The Bright Stream.  Set to the music of Dmitri Shostakovich, Ratmansky’s production received its World Premiere by the Bolshoi Ballet in 2003.

A comic ballet in two acts, The Bright Stream tells the story of the members of a Russian farm collective in the 1930’s and their humorous interactions with a group of visiting performers during the harvest festival.  The original production of The Bright Stream, choreographed by Fyodor Lopukhov, was first performed in 1935 in Leningrad.  The ballet will be given its ABT Company Premiere on January 21, 2011 at the Kennedy Center for the Performing Arts in Washington.

Music Center – Performing Arts Center of Los Angeles County is one of the largest and most highly regarded performing arts centers in the United States. Every year, almost 2 million people visit its four main venues — Dorothy Chandler Pavilion, Ahmanson Theatre, Mark Taper Forum, and Walt Disney Concert Hall — along with its vibrant collection of outdoor theatres, plazas, and gardens. The Music Center produces a variety of programming including Glorya Kaufman Presents Dance at the Music Center, Active Arts at the Music Center, and The Blue Ribbon Presents Global Pop, along with programming for children and families throughout the year.  The Center also provides extensive services and leadership in support of K-12 arts education, and offers tours of all four venues.   The Music Center is home to four internationally acclaimed resident companies: Los Angeles Philharmonic, Center Theatre Group, LA Opera and Los Angeles Master Chorale.