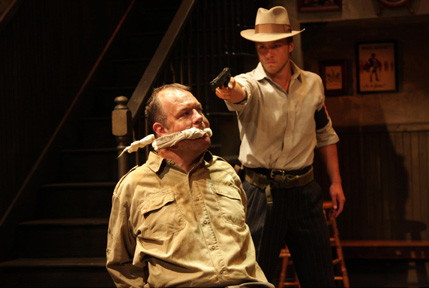 An obscure melodrama – Peace in Our Time at Antaeus 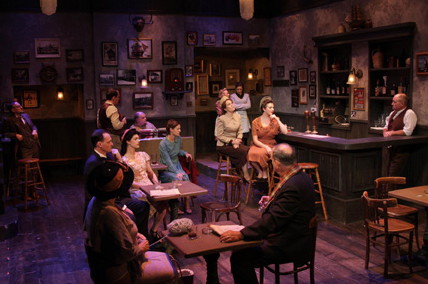 You have to wonder if filmmaker Quentin Tarantino ever read Peace in our Time, this odd and seldom performed play written by Noël Coward, now playing with two alternating casts at Antaeus Theatre in North Hollywood. It’s unlikely that Tarantino saw it on stage, seeing as the play apparently has not been performed in Los Angeles since it was staged at the Pasadena Playhouse in 1950. (It was last staged in London in 2006.) Yet there is certainly more than one inspirational similarity to be detected, starting with the fanciful ‘what if…?’ premise. What if the Nazis had successfully invaded and taken over Britain? What unfolds over two acts is a chilling glimpse into how altered British life becomes during wartime under enemy occupation.

First published in 1947 and set in a London Pub during the 1940s, Peace in our Time is Noël Coward’s study of a small and diverse group of Londoners, examining how they respond to their beloved country being occupied by victorious Nazi forces. As tensions mount, so does an underground resistance movement, furtively working to overthrow and defeat the occupied forces.

This is a new adaptation by Antaeus company member Barry Creyton that also incorporates nine of Coward’s lesser-known songs. Reportedly Creyton cut 40 minutes of dialogue and eliminated 12 characters from the play in order to fit in all the songs, but I’m not entirely sure this was such a good idea.

Directed by Casey Stangl, with musical direction by Richard Levinson, at one hour and forty, the play feels like it runs too long. There are far too many song interludes (thirteen, including reprises) and unfortunately these frequently dissipate the dramatic tension, to the detriment of the experience. It doesn’t help, either, that the songs are very similar, running the gamut from rousing pub singalongs to nostalgic, treacly ballads.

I should add that the singing from all is quite lovely. As a member of the “Epps Cocoa” cast, songbird Lyia Vivian, Raleigh Holmes delighted the audience with her haunting renditions of the often sentimental tunes.

Emily Chase also shone as the feisty writer Janet, who riveted the audience with her blistering attack on the Noel Coward-type character, a weaselly writer Chorley played by JD Cullum. 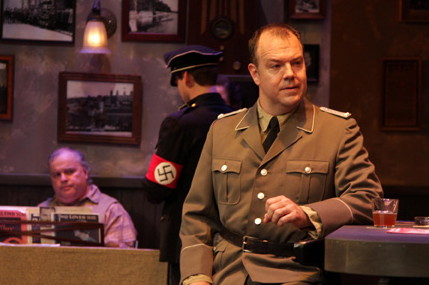 Eschewing his trademark sparkling witticisms, Coward’s drama is a work of deep passion. It’s a tribute to patriotism and the British sense of fair play and staunch cultural bravado.

According to wikipedia, Coward was inspired to write the play by seeing the effects of the occupation of France in Paris, writing “The idea of Peace in Our Time was conceived in Paris shortly after the Liberation… I began to suspect that the physical effect of four years intermittent bombing is far less damaging to the intrinsic character of a nation than the spiritual effect of four years enemy occupation.”

Peace in Our Time is a handsome – though overly melodramatic and drawn out – production with strong performances and decent British accents from all.

All production photos by Geoffrey Wade.

Peace in Our Time

(one block south of Magnolia; free parking available in the uncovered Citibank lot on Lankershim Blvd. south of Otsego St.)

Thursdays, Fridays and Saturdays at 8 pm

Approximately 1 hour and 40 minutes, including a 15-minute intermission

The Antaeus Company strives to keep classical theater vibrantly alive by presenting professional productions with a top-flight ensemble company of actors. Taking their company name from the Titan who gained strength by touching the Earth, Antaeus members – many of whom are familiar to movie and television audiences – regain creative strength by returning to the wellspring of their craft: live theater performances of great classical plays.

All Antaeus productions are fully double cast, with two equally talented actors sharing every role. This means that audiences never see an understudy and frequently come back to see each show a second time in order to see the same play in the hands of an equally excellent but very different set of actors.

Members of the company and its board span a wide range of age, ethnicity and experience; they have performed on Broadway, at major regional theaters across the country, in film and television, and on local stages, and are the recipients of multiple accolades including Tony, Los Angeles and New York Drama Critics Circle, Ovation, LA Weekly, and Back Stage Garland nominations and awards.