A descent into hell — 9 Circles at Bootleg 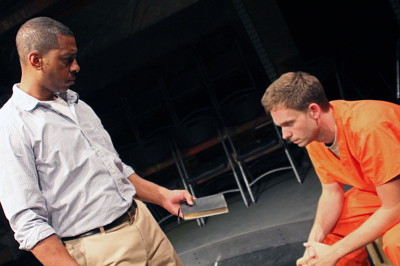 If within the pattern of my morning, I picked up a newspaper and read an article about an 18-year-old man accused of killing a family of four and after, raping and torching the 14-year-old daughter, I would never consider the human qualities of this monster.

In Bill Cain’s truly great play 9 Circles, however, the audience comes face to face with the killer and discovers that resentment and hatred don’t quite come easy. As he descends through Cain’s version of the nine Circles of Dante’s Inferno, the audience towers over and surrounds leading character Daniel Reeves (Patrick J. Adams).

Broken and fragile, this monster capable of such brutal crimes becomes endearing in our eyes, despite his psychologically driven evil tendencies. Upon returning home with honorable discharge, Reeves finds himself facing the death penalty for his heinous acts in an Iraqi home. Along his descent we meet Paul Dillon, Joe Holt and Arlene Santana, each playing an impressive myriad of characters throughout Reeve’s journey to hell. Especially memorable was Joe Holt’s turn as the visiting Pastor. We soon realize Reeves has become a scapegoat, a tool being used to prove a point on morality in a war completely devoid of morals. Abandoned by his army brothers all accomplices to the murderous spree and who are now confessing to Reeves’ crimes to avoid their own. This obviously psychologically troubled young man who found an identity in the camaraderie of war is now being betrayed by the only family he had – the army.

None of this cathartic compassion would be possible without Cains’ distinct and dignified writing but also the devastatingly tender performance by Patrick J. Adams, whose veins seemed to pulse the truth of this sad troubled boy, stripping himself literally to complete a fully vulnerable and thorough performance. Adams (for whom the lead role was written) led us breath-bated through this tour de force as if his body were made of tissue paper or a glass vase bursting full of tacks.  Adams conveys complete clarity when portraying the labyrinthine character.

Director Justin Zsebes’ immaculate and graceful attention to detail gave the whole piece an impressive spinal structure that supported the body of this play and allowed the actors to become the voices and the heart of the piece. Even having the crew changing Reeves clothing and positioning him for scenes in cold concise movements exemplified how much of a pawn this character was.

Bootleg Theatre is one of the most exciting spaces in Los Angeles, particularly in terms of its ability to completely transform from show to show. This is exemplified by the spectacular adventurous set design courtesy of Jason Adams. Given three viewing options, I climbed up a ladder to my seating in the stands to watch from above, enjoying an exciting voyeuristic experience seamlessly lit by the legend that is lighting designer Lap Chi Chu, alongside a solid sound design from Adam Phalen and costumes from Kathryn Poppen.

9 Circles is an important play to see.  It offers the idea of one of the most important lessons one can learn; how to feel the pain of our enemy. 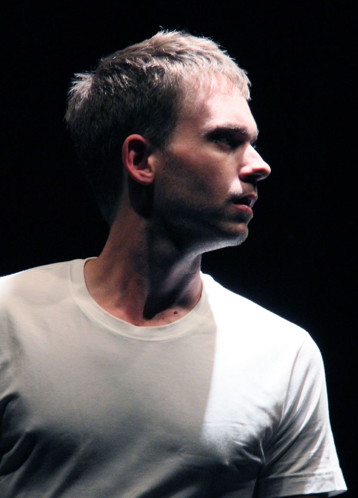 Thursdays, Fridays, and Saturdays at 7:30pm

Purchase tickets at their official site,

Bootleg Theatre is a 1930’s warehouse and a home for Los Angeles artists who work in theater, music, dance, and film. Bootleg Theatre provides artistic support and production resources to help these artists create original and daring interdisciplinary work. Combining art forms creates work that is surprising, unexpected, exciting and reflective of life in Los Angeles, a city where the boundaries are elastic, and not bound by tradition. Bootleg Theatre offers Los Angeles a celebration of itself.