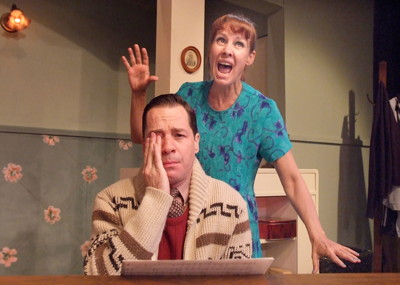 Justin Tanner’s Voice Lessons drops us into a strange relationship between a deluded community theatre wanna-be actress and the uptight and overeducated vocal coach she hires to make her a star.

This comedy starts off quite crazy and becomes increasingly manic over the course of its breakneck 50 minutes.

We all know someone who is opinionated, tactless and uncomfortable to be around; someone who lacks a filter between their mind and their mouth. Tanner has fashioned a character that is so outré, you simply cannot believe the verbal diarrhea that gushes forth. Metcalf as Virginia is so garrulous, gauche and obnoxious, she’s agonizingly hilarious to watch. Complementing this character’s outrageous, line-crossing behavior are her increasing outlandish outfits. Short scenes and quick changes see Metcalf reappearing in odd printed dresses, velour athletic ensembles and even a yellow catsuit teamed with a black beret. Her electric blue eye shadow is icing on the crazy cake.

Meanwhile, Stewart’s character Nate struggles to maintain composure throughout, yet even he has his breaking points as we see his sarcasm beginning to leak out. Some of the play’s best surprises are his bitter outbursts and his similarly skewed fashion sense. Maile Flanagan is equally fantastic as a peripheral character whose presence infers some amusingly contentious back story.

Now in its third LA staging, this acclaimed comedy trio is reuniting once again for this season at the Whitefire Theatre in Sherman Oaks, under the direction of Bart Delorenzo. Previous productions include an extended run at the Zephyr Theater in West Hollywood early 2009, and a highly successful run at Sacred Fools Theatre earlier this year. Additionally, French Stewart is a multiple Ovation Award nominee this year for his performance in Voice Lessons and also in Watson – The Last Great Tale of the Legendary Sherlock Holmes, Sacred Fools Theatre).

Voice Lessons is a perfect case of comedic writing teamed with riotously zany performances – do not miss this play!

The Whitefire was founded in 1982 with a dedication to bringing quality theatre to Los Angeles and the San Fernando Valley. The Whitefire is located on Ventura Boulevard’s Restaurant Row in Sherman Oaks. The theatre provides professional performance space for independent productions, classes, workshops, casting and rehearsals. Several film and video projects also use the space, including Buena Vista Television, MTV Casting, VH1 Productions, Shana Landsburg Casting, NY Film Academy, Cartoon Network & Marvin Worth Productions. The Theatre is a member of the Valley Theatre League.