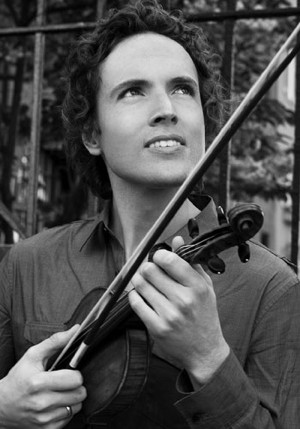 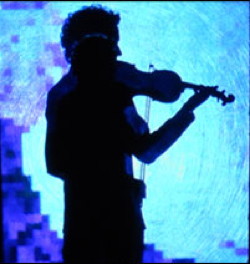 Virtuoso, rising star violinist Tim Fain will be premiering his collaboration with legendary composer Phillip Glass on Sunday October 9th, at 4:00pm as part of Portals, an evening-length, multi-media musical exploration of the human longing for connection in the digital age.

A seven-movement musical work, Partita for Solo Violin, was written by Glass specifically for Fain. This collaboration brings together the 34-year-old violin virtuoso from Santa Monica with the 74-year-old legendary pioneer of American minimalism, to create a performance which will be a true cultural event for the 21st Century.

The highly anticipated Portals is inspired by the solo from Leonard Cohen’s Book of Longing. In an onstage “dialogue” between live and multimedia works, Fain guides the audience through failures and triumphs of new portals of relationship, our electronic present and future. The production interweaves film by Kate Hackett, video choreography by Benjamin Millepied, the dance visionary behind the Oscar-winning film Black Swan, as well as works by composers Nico Muhly, Pulitzer Prize-winner Aaron Jay Kernis and Kevin Puts.

With his adventuresome spirit and vast musical gifts, violinist Tim Fain has emerged as a mesmerizing new presence on the music scene. The young violinist was featured in Black Swan as the violinist accompanying Oscar winner Natalie Portman. The movie’s director Darren Aronofsky included close ups of Fain performing selections from the film’s central piece of music, Swan Lake, to create an inspiring context of passion and skill for his actors.

A dynamic and compelling performer in traditional works, Fain has performed all over the world, and is also a fervent champion of 20th and 21st century composers. His provocative debut CD on Image Recordings of music for solo violin reflects Fain’s inquisitive passion and intellect by combining old and new in solo works by J.S. Bach, Fritz Kreisler, Kevin Puts, Mark O’Connor, Daniel Ott and Randy Woolf.

The premiere of Partita for Solo Violin matches this new virtuoso with a composer credited with no less than changing the course of music in the 20th century. In an onstage dialogue that interweaves video, electronics, spoken word and dance with music, Portals guides us through the failures and triumphs of new portals of relationship in the digital age, our corporeal and electronic present and future. With Fain’s performance of the piece composed for him by Glass at its heart, Portals offers an experience both dazzling and profound.

Under the leadership of Director Dale Franzen and Artistic Chair Dustin Hoffman, The Eli and Edythe Broad Stage at the Santa Monica College Performing Arts Center opened its doors in Santa Monica in October 2008. Inspired by Italian “horseshoe” theaters, yet conceived in an absolutely contemporary vernacular, The Broad Stage is an artist’s dream and an audience’s delight. Unlike any performance space in the country, it is sublimely intimate with 499-seats and strikingly grand at the same time – allowing eye contact with artists from the boxes to the back row -forging a new kind of artist and audience experience in Los Angeles. Theater, dance, film, operas, musicals, symphony and chamber orchestras will be presented on one of the city’s largest proscenium stages. Designed without compromise to embrace the artistic process from inspiration to opening night, and conceived as a global theater and community hub. In addition to The Broad Stage, The Edye Second Space, a smaller black box theater, presents new, developing and innovative work in theater, music and dance as part of the Under the Radar Series. Featuring younger, innovative artists and chamber pieces and plays, programming at The Edye is intentionally spontaneous, reflecting the dynamic nature of the space and allowing the latest, most exciting artists to be booked on short notice.