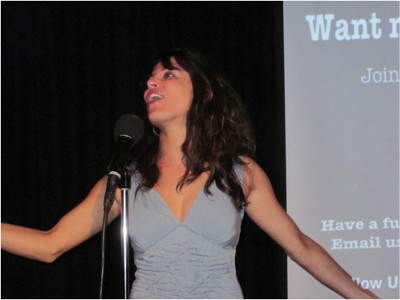 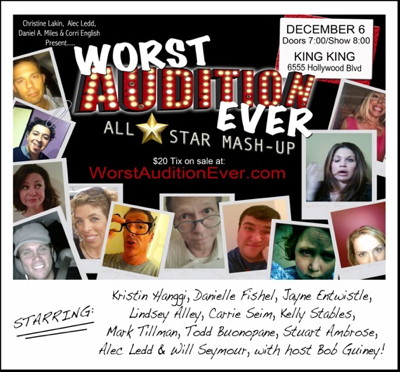 After three successful presentations in Silverlake, the cult-hit show Worst Audition Ever is coming to King King in Hollywood on Tuesday, December 6.

Worst Audition Ever is an evening of comedy about a group of artists (actors, directors, dancers, etc.) telling their real stories about the all-too-familiar audition process. The format is simple – just a bare stage with one microphone – making the shared stories truly intimate and personal. For anyone who has ever had an embarrassing moment “putting themselves out there” in the name of art, Worst Audition Ever presents a wry and candid evening of some of the most awkward moments in artistic vulnerability, because pain is best served funny and with cocktails.

Produced by Christine Lakin, Alec Ledd, Daniel A. Miles and Corri English, Worst Audition Ever was conceived one evening when a circle of friends were drinking beer and sharing war stories about their artistic lives. The darkly funny, off-the-wall material that ensued formed the concept and basis for this show. Some of LAʼs funniest comedians have taken to the mic to reveal their awful, hysterical tales.

Painfully true, mutually hilarious and completely cathartic, Worst Audition Ever has built an underground following playing small clubs in Los Angeles and building a viral fan base since April 2011.

Artists participating in Worst Audition Ever:

Kristin Hanggi (Tony Nominated Director of Rock of Ages playing in the US, London, & Australia)

Will Seymour (The Groundlings, Joan of Arcadia, Mortified Live, This American Life)

The evening will be hosted by Bob Guiney (The Bachelor, HGTVʼs Showhouse Showdown, GSN Live).

at Casita Del Campo in Silverlake

Tickets can be purchased in advance here or here.

King King Hollywood is a converted sound stage in the heart of Hollywood Blvd. The venue has housed everything from rock concerts to circus shows and was the home of Rock of Ages debut. King King is a 21+ venue and is located at 6555 Hollywood Blvd. in Hollywood, California.