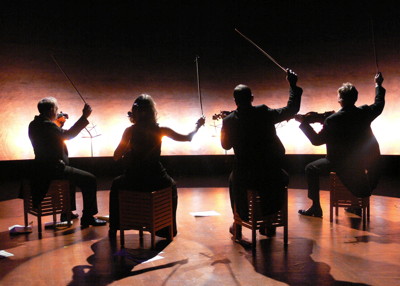 This week’s theatre review – LA Weekly “Dissonance” at the Falcon

This week’s theatre review for the LA Weekly is for Damian Lanigan’s play Dissonance, now playing at the Falcon Theatre in Toluca Lake.

Click here and then scroll down a little bit to read it.

While providing a rare and interesting glimpse of the behind-the-scenes squabbles and power struggles of a quartet of classical musicians, regrettably Damian Lanigan’s drama Dissonance relies too heavily on cliché, in both character and story.

Crispin Whittell’s staging fluidly shifts from the rehearsal room to the rocker’s pad and back, but the director fails to orchestrate a uniform acting level from his troupe; sometimes emotion is mistaken for loud volume. Glaringly absent is a scene where Beth explains her expensive new cello to her colleagues.