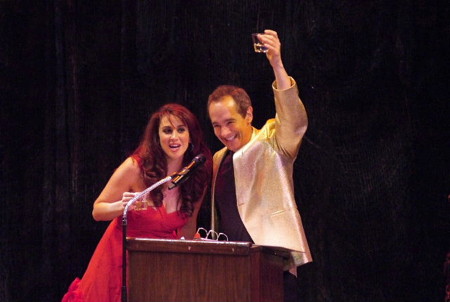 “A night of Lad-Sissies celebration!”

In addition to handing out the numerous prizes for excellence in theater, the Awards event featured the Los Angeles premiere performance of My Husband, by Paul Rudnick, a short play added to the New York production of Standing on Ceremony: The Gay Marriage Plays. The play was performed by Wendie Malick (Hot in Cleveland) and Christopher Gorham (Covert Affairs).

Yvette Tucker and Salvatore Vasallo also performed a sizzling excerpt from “Slaughter on Tenth Avenue,” a dance duet from On Your Toes, choreographed by this year’s Hirschhorn Award recipient, Lee Martino.

All photos by Ed Krieger.

The award recipients for the 2011 Los Angeles Drama Critics Circle Awards are as follows:

The Ted Schmitt Award for the world premiere of an outstanding new play was awarded to David Wiener for Extraordinary Chambers. The award was accompanied by an offer to publish by Samuel French, Inc.

The Polly Warfield Award for an excellent season in a small to mid-size theater was awarded to Rogue Machine. The award was accompanied by an honorarium, funded by the Nederlander Organization.

The Bob Z award for career achievement in set design was awarded to Kurt Boetcher.

The Angstrom Award for career achievement in lighting design was awarded to Lap Chi Chu. The award was accompanied by an honorarium, funded by Angstrom Lighting.

The Margaret Harford Award for sustained excellence in theater was awarded to the Odyssey Theatre.  The award was accompanied by an honorarium, funded by contributions from the theatrical community.

The Joel Hirschhorn Award for outstanding achievement in musical theatre was awarded to Lee Martino.  The award was accompanied by an honorarium, funded by an anonymous donor.

The Milton Katselas Award for career or special achievement in direction was awarded to Matt Shakman. The award was accompanied by an honorarium, funded by The Katselas Theatre Company.

The Los Angeles Drama Critics Circle was founded in 1969.  It is dedicated to excellence in theatrical criticism, and to the encouragement and improvement of theater in Greater Los Angeles.

The 2011 voting members of the LADCC consisted of:

The LADCC is grateful to A Noise Within for the donation of the use of their theater, and to the entities and individuals who  agreed to sponsor some of their special awards this year.

Go here to read the full list of nominees for the 2011 Los Angeles Drama Critics Circle Awards for theatrical excellence.

A Noise Within (ANW), led by Founders/Artistic Directors Geoff Elliott and Julia Rodriguez-Elliott, is the only year-round classical repertory company in Southern California.