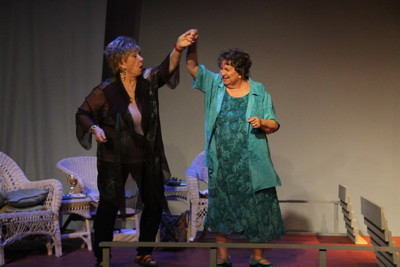 Latest theatre review for LA Weekly – “If We Are Women”

This week’s theatre review for the LA Weekly is for If We Are Women, written by Canadian playwright Joanna McClelland Glass in 1993, now playing at The Lonny Chapman Group Repertory Theatre in North Hollywood.

Click here and then scroll down about halfway to read my review.

If We Are Women

Currently playing in rep with Cobb, this 1993 kitchen sink feminist dramedy by Joanna McClelland Glass, about three generations of women questioning their life’s choices, is as dull as dishwater.

The play’s title is an allusion to Virginia Woolf. Featuring some truly abysmal acting from most of the cast of four, the overly long, two and a half hour play inches along at a painfully slow tempo. Inexpertly merging dialogue with direct audience address, the dreary ramblings, wry but inane observations and tedious stories include boring truisms such as “handsome is in the eye of the beholder” and “motherhood is a farce.”

Some friction lies in scenes where the three middle-aged women berate the entitled and selfish daughter/granddaughter Polly (Annie Mackay) for squandering her opportunity for a college education they never saw. As Polly opines, “You think you’re wise and experienced, but you’re just old and cynical.”

In one revelatory monologue, about 45 minutes in, the Jewish mother-in-law (a decent Marcia Loring) describes why she stayed close with her daughter-in-law after the latter divorced her son.

The rest is rubbish.

If We Are Women