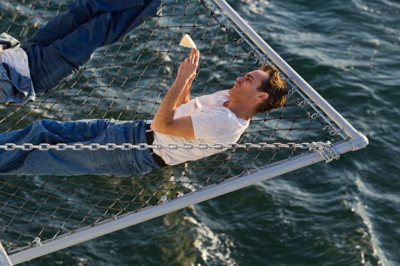 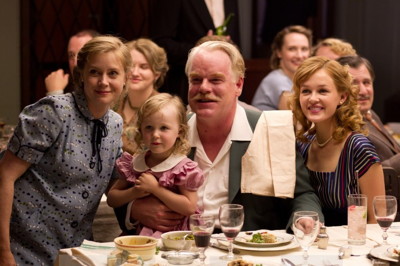 When I first heard about Paul Thomas Anderson’s new film – word was that it was about a Scientology-type leader and a drifter who becomes attached to him – I assumed Anderson’s focus would be on cult and power, and on the motives and means by which one individual controls another.   I was mistaken.

Anderson may have drawn on research about the early years of Scientology to create the framework for his story, but the aim of his narrative is not to enlighten his audience about the tyranny of cults or the perils of mind control or the dynamics of power.  His story is, much more simply, intensely individual, involving the attraction between two wildly dissimilar individuals and the erratic arc of their friendship.

Set in the aftermath of World War II, it begins by tracking the misadventures of Freddie Quell (played by Joaquin Phoenix), a Navy veteran and a deeply disturbed man. Even to look at, Freddie is a strange scary bird. His shoulders hunch and his spine seem twisted, as if the entirety of his gnarled soul is on display for all to see. Phoenix portrays this man with an intensity as raw as I’ve ever seen on screen.

Freddie is as unpredictable as a landmine; one never knows when he will go off.  An alcoholic, he uses paint thinner to mix his own toxic hooch.  A man he shares it with falls deathly ill, and Freddie must flee for his life with the man’s furious grieving friends in hot pursuit.

Eventually he stumbles onto a boat that is hosting the friends and disciples of Lancaster Dodd, the leader of a pseudo-religious sect called ‘The Cause.’ Dodd, played by Philip Seymour Hoffman, is as controlled and unflappable as Freddie is tense and wired.  None of the people around Dodd like Freddie very much, especially Dodd’s wife (Amy Adams, a cool customer herself), but Dodd is drawn to him, and Freddie responds.  From then on, woe to the individual who threatens or casts aspersions on the “master” in sight or sound of this dedicated disciple.

That volatility creates plenty of suspense down the line, but it’s not the only element that keeps us riveted to the screen. Though not nearly as flashy as Phoenix’ mercurial character, Hoffman’s performance is a consummate one.  At some point we begin to perceive that Dodd is not nearly as confident as he would have people believe.  Cracks emerge in his facade.  We see his apprehension before he appears on stage before a group. When an adoring follower, a well-to-do housewife played by Laura Dern, has a question about his new book, a departure from his prior dogma, Dodd explodes.  It’s a terrifically nuanced moment for both actors: the reluctant doubt about his impregnability in her eyes, his uncomfortable awareness of her doubt and his swift recovery of an air of patient authority.  Damage control (but too late…)

Indeed, the movie is filled with such subtleties, displayed in manifold close-ups, intimate and revealing. Is Dodd a charlatan? Maybe – but if so, he’s a damn good one – so good that he seems to have even fooled himself.

Anderson starts out telling a panoramic tale, with shots of the sea and a swelling score, and a series of scenarios that introduce Phoenix’ spooky singular nomad. A period melodrama?  Thankfully not.  A look at the inner workings of an insular creed.  Partially, yes.  At some point, though, the historical and social peripherals disappear, and we segue into a compelling portrait of two complex personalities, masterfully rendered by two gifted actors.

The Master by Paul Thomas Anderson is now playing in selected LA cinemas.