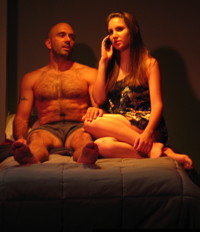 There’s been a whole lot of backstage (and audience) shenanigans swirling around the production of Andrew Osborne’s play No Love, currently running at the Eclectic Company Theatre, in NoHo (until Oct 4th).

You can read my review of the play here.

You can read the LA Weekly article here!

In playwright Andrew Osborne’s new play, the pitch-black “comedy” No Love, no one onstage is getting any love. But there is a lot of sex and nudity, not to mention violence, gunshots and profane language.

This is actually pretty standard fare for the the Eclectic Company Theatre in NoHo, which has been known for premiering edgy new works since its founding in 1989.

But what is not typical is the amount of on and offstage drama this production has encountered during the early weeks of its run.

I happened to be present on opening night and observed an angry verbal exchange in the audience after the play had concluded. One patron was screaming at another for “flashing the light in his eyes.” Apparently the offended party had objected to the woman seated next to him checking a text from her son during the play. The hostile guy (later found to be a critic from an obscure theater blog) followed the couple outside and seemed to want to carry on the argument before abruptly departing.

On the second night of the run, the curtain was held for 25 minutes because of a different kind of backstage drama. A trivial argument escalated until one actor punched one of his co-stars (Lordygan declined to name names). “We almost had to cancel because the punched guy wasn’t gonna go on,” groaned Kerr Seth Lordygan, the artistic director of the Eclectic and No Love’s director. The stage manager, Jennifer Salas, and the show’s producer, Timothy Sprague, managed to talk the punch receiver into getting onstage with his aggressor. Sprague filled in on a small part to ensure the feuding pair did not share any scenes that night.

The puncher was sacked after that performance and Lordygan took over his role until a replacement could be found.

Lordygan was mortified by the delayed start time. “I felt bad because we had no house manager,” he says, “so the producer and the stage manager were dealing with separating the two, so no one was available to apologize to audience about the delay.”

So does this sort of thing happen often? Recalls Lordygan, “I did do a show at a Westside theater a year and a half ago and there was almost a fistfight backstage. Then one of the actors, who was already on ‘probation,’ urinated in a prop glass before it was supposed to come onstage and be drunk from. He wasn’t fired, though.” Lordygan declined to name the theater.

Just another week at the Eclectic, then? Lordygan emphatically disagrees: “Stuff like this does not go down a lot. I tend to weed out assholes or crazies or just plain difficult people as best I can, because we want a safe environment.”

Lordygan has 15 years experience of managing actors at a local theme park (which he declined to name). “Even all that experience doesn’t prepare you for some of the craziness that can happen anywhere, not just theater. You just really never know what might set someone off. If you ask our playwright, Andrew Osborne, he will tell you that this particular play makes people crazy. It sure does spark some deep, dark emotions in people!”