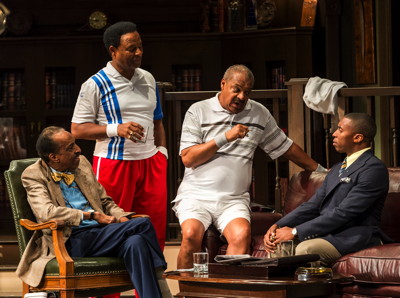 My theater review this week for the LA Weekly — the ‘Pick of the Week‘ — is of Fraternity, an Ebony Repertory Theater production, now playing at the Nate Holden Performing Arts Center.

Click here to go to the LA Weekly’s theater page and scroll about halfway down to read it.

Jeff Stetson’s all-male political drama, Fraternity, written 25 years ago, has a prescient power to it. Set in Birmingham, Alabama, the storyline presents a prosperous group of black men, members of a private gentleman’s club, and the tragic history that shaped each of their lives. A shocking bombing of the 16th Street Baptist Church in their hometown resulted in the death of four little black girls, accelerating the civil rights movement.

At first there’s the typical clubby banter, comedy showboating and gentle ribbing between longtime friends. But it’s not long before the gloves come off and some fiery exchanges turn accusatory and menacing. As the men reflect on the ideals that shaped their careers, the cast infuses their performances with the jaded weariness of compromise.

While Robinson capitalizes on the comedic elements of his arrogant Senator, Henry Miller directs with a firm hand, muting the drama to let its quiet strength emerge. Stetson’s play proves bombastic, feels overlong yet is provocative viewing.