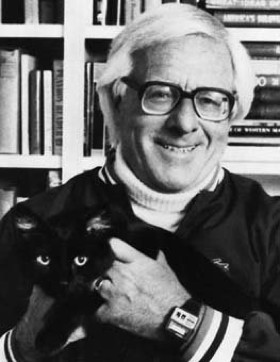 Ray Bradbury, one of the world’s most popular authors, died earlier this year at 91. Often categorized as a science fiction author, he preferred to be called a fantasy writer. He also wrote everything from mysteries to poetry. He began his professional writing career as a joke writer for Burns and Allen, but a series of now-classic books including “Fahrenheit 451,” “The Martian Chronicles,” “Something Wicked This Way Comes,” “The Illustrated Man,” “Dandelion Wine” and more, established him as America’s Storyteller and one of the great fantasy and science fiction writers of the last century.

Mr. Bradbury also loved theater, and produced plays based on his works as well as original scripts at venues in the Los Angeles area for nearly five decades. For the last six years that he actively produced, his artistic home was the Fremont Centre Theatre in South Pasadena, which hosted his shows “Green Town,” “The Wonderful Ice Cream Suit,” “Dandelion Wine,” “Fahrenheit 451,” “Autumn People,” “The Machineries of Joy,” “The Illustrated Bradbury,” “Invisible Boy,” “2116” and “A Ray Bradbury Christmas,” presented by Ray Bradbury’s Pandemonium Theatre Company.

The Bradbury family did not want a large public memorial ceremony for Ray after his death. So instead, members of Ray Bradbury’s Pandemonium Theatre Company will perform readings from his works in the intimate auditorium of the Fremont Centre Theatre on Sunday, October 21, 2012 at 7:30 p.m, ten days before Halloween, Ray’s favorite night of the year.

Seating is limited to 75 guests.

Tickets are available for a suggested minimum donation of $20.00, with proceeds benefiting the Friends of the South Pasadena Library, because public libraries were so dear to Mr. Bradbury’s heart.