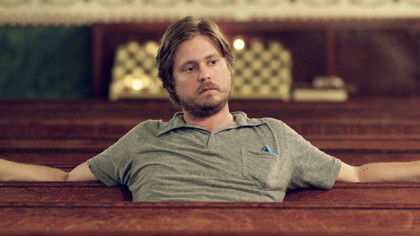 Not every sociopath is an axe murderer or a conman.  In The Comedy, director Rick Alverson’s painfully unfunny and self-indulgent film, the main character never carries out a violent act, nor does he boldly go up against the law.  But he treats other people so indifferently, so dismissively and with such careless cruelty that the label fits.

The film stars Tim Heidecker as 35-year-old Swanson, an indeterminately wealthy guy with the money and leisure to play all day.  The opening sequence finds him engaged in a slobby booze-fest with several other skuzzy guys.  They guffaw, drink, spit, regurgitate and dance around while the camera cruises their flabby torsos, lingering on the visible crack in one dude’s buttocks as his pants sink beneath his hips.  Like almost every sequence in this dreary movie, the scene goes on long after the point has been made.

From there the movie follows the bored and jaded Swanson in his aimless search for amusement.  This usually involves playing with someone’s head or making another person feel uncomfortable while maintaining a bland and earnest demeanor. Early on he visits his comatose Dad where he mocks the young male nurse attending to his father’s physical needs.  He needles the regulars in an African-American bar (they show admirable restraint by not beating this paunchy white guy to a pulp).  He badgers an immigrant cab driver into letting him drive his cab in exchange for $400, careens recklessly through traffic, and then tricks the unsuspecting man out of the cab and drives away.  When Swanson’s sister-in-law tracks him down, pleading with him to sign an important document, he puts her through changes that include climbing into his speedboat and taking a spin before he’ll put pen to paper.

Even in moments when you think he might have felt something, where some glimmer of sentiment has passed over his face, it turns out to have been a mirage.  A hint of care he displays for a sleeping lover (how ever in the world did he score with her, I had to ask myself) soon evaporates as his caress evolves into pulling and prodding her face into contorted grimaces.

Of course this is hardly the first film ever made about a spoiled sybarite, and it’s not likely to be the last. The issue here is not merely that Swanson is unlikable and unappealing, but that Alverson spins his story so tediously, furnishing only the skimpiest details about his background, and making no attempt to enlighten us about the reason for his boorishness, or its consequences.  It’s been implied elsewhere that this portrait of ennui is a deceptively deep comment on American society, or at the very least on a privileged class of its citizens.  To me it’s just plain lazy filmmaking that pivots toward the lowest common denominator.

Now playing at the Cinefamily cinema,