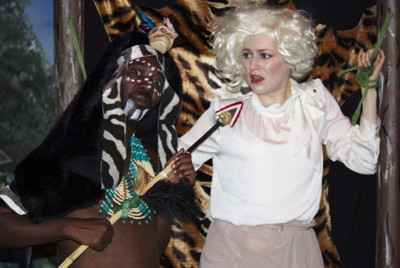 has been extended through SUNDAY, DECEMBER 9, 2012

My recent theater review for the LA Weekly is of KONG: A Goddamn Thirty-Foot Gorilla by Adam Hahn, and directed by Jaime Robledo.

A SkyPilot Theatre production, KONG is now playing at the T.U. Studios in North Hollywood.

Adam Hahn’s spoofy homage to King Kong, the 1933 creature feature about a colossal gorilla that is captured and runs amok in New York City, is an ambitious undertaking. Just how do you depict a giant ape on stage without stop-motion animation trickery and cinema magic?

Cast members tilt and sway in unison to suggest the passage of a ship. Tifanie McQueen’s scenic and prop designs are minimal and effective, and curiously less complicated to re-set than the lengthy scenes in front of the curtain should warrant. Yet some of these odd scenes, including shipman Jack Driscoll’s (Eric Curtis Johnson) confessions to an AA meeting and Skull Island Native Chief (Arden Haywood) shedding his headdress to instruct us about “race” movies from the 1930s, offer some deliciously amusing rewards.

Audience members are enlisted to the air squadron for Kong’s Empire State Building climactic demise by the supply of do-it-yourself paper airplanes.