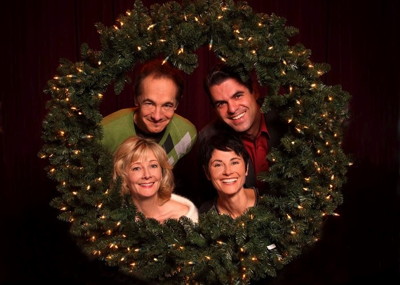 A cabaret-style holiday show of hit tunes, now playing at the El Portal, is Christmas My Way – A Sinatra Holiday Bash! The show stars crooner Luca Ellis (recent star of Hoboken to Hollywood) along with Jason Graae, Heather Lee and Beth Malone, and delivers cool versions of Frank Sinatra favorites, such as “Fly Me To The Moon,” “New York, New York,” “That’s Life,” “Love and Marriage,” “I Get A Kick Out of You,” “I’ve Got You Under My Skin,” and “The Lady is a Tramp”.

The warbling quartet is joined by a swingin’ live band, for their Rat Pack-ish interpretations of yuletide favorites such as “Twas the Night Before Christmas” and “The Twelve Days of Christmas,””Mistletoe and Holly,” “The Christmas Song,” “Christmas Memories,” “Winter Wonderland,” “Silver Bells” and “I’ll Be Home for Christmas.”