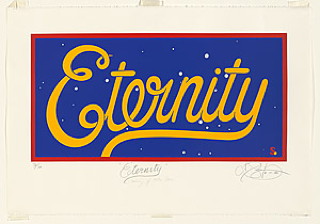 “Eternity” – a filmic tribute to a Sydney ghost by Lawrence Johnston

For almost half a century (between 1932 ’till the late 60s) a single word would appear beautifully inscribed on the streets of Sydney. It was always the same, written in yellow chalk in perfectly elegant copperplate script; Eternity. In his exquisite one-hour documentary, released in 1994, Lawrence Johnston relates the story of this mysterious and single-minded graffiti artist Arthur Stace, an old derelict fellow who had lived a rough life. We learn how Stace was compelled to leave his particular mark on the pavements of Sydney and the affect his repeated actions had on those who saw the fleeting evidence of his work.

Back in 1994, I asked Johnston’s what was his most important message—what did he want the audience to come away from his film having gained?

Johnston, “I guess I want them to feel that there are things in life that one can achieve with out having to be a success in the usual sense. In society today, people are driven to advance their career and be correct about things. Arthur Stace was an outsider and I think that those people in our society provide functions in our society that are equally as valuable as those who uphold societies values.”

Continues Johnston, “He was a winner, but in a very unusual way. I’m not a Christian person myself, so I don’t think its great that he was pushing the word of God, because that can be incredibly conservative and oppressive. His behavior – what he did – and the way it affected people by seeing it, and the way they interpreted it – to me that’s the beauty of the story.”

In his documentary, Johnston adopts an incredibly romantic viewpoint, emphasizing the beauty of a lingering memory. As he puts it, “It’s those smaller, fleeting moments that sustain you in memory for years and years. It was about someone who walked about in the dead of night. I could have made a very realist, harsh even anti-religious documentary about it. I realized there were these folkloric aspects, that it’s part of this city’s urban history and that it was also about religious aspects. I wanted to make a film which was accessible to people and I was wondering how I would deal with the religious aspects. I felt there was a responsibility to make a film of a certain quality. So, cinematically, I wanted to give the film a fairly elegiac tone with the repeated action and the music rolling over you.”

Eternity opens with iconic imagery, with a parade of archival footage gathered from all over the world from that era. Johnston explains his objectives; “It was to set up that there are icons in our lives that bring us together in common experience and it’s those commonalities that make us connect with one another. ‘Eternity’ was an icon in this city, Sydney, for forty years. By combining the archival footage of the men on the rocks with the voice over of Ridley’s sermon there are inferences of baptism with water, but it was mainly to make a big moment in the film. Stace was converted in 1932 by Ridley’s sermon and it was in that year that the Harbour Bridge was completed and opened. Showing him walking away from the bridge and from society into a great change in his life, because he walks into the waves through a dissolve. Using those cinematic aspects to make the audience feel for the character, and interpreting the conversion based on research.”

Johnston combines the archival footage, painstakingly selected, with interviews with those who witnessed Stace’s mark and were influenced by it. The people who stand out are the writer Dorothy Hewitt and artist George Gittoes, who each talk about how they incorporated this influence into their own creative work. Adds Johnston, “I think it’s different for everyone. Dorothy Hewett wrote about it in a non-religious way, as a figure of the city, as a part of a setting, an unusual mood thing. She wanted to connote that lovers can be together forever, it was an ending of a chapter but a promise of things to come, that everything could be eternal.”

But what stands out in this beautiful film is Johnston’s live footage, photographed in gorgeous black and white, of an actor—Lex Foxcroft—who plays the enigmatic Stace, showing how he passed through the city like a phantom in the night.

“The thing was to play around with the idea of myth-making. I’m keeping the myth alive but I think there are lots of points of view in the film,” smiles Johnston.