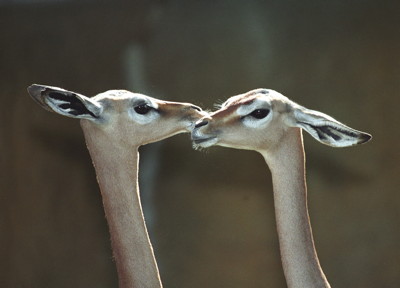 Sex and the City Zoo 4: Sexy Beast! – an extraordinary Valentine’s Day event celebrating romance in the animal kingdom – is presented by the Greater Los Angeles Zoo Association (GLAZA) on Saturday, February 9, 2013, 5 pm, in the Zoo’s Witherbee Auditorium.  The adults-only affair features a lighthearted and enlightening talk by actress Joleen Lutz, who is also known for her work as an interpretive naturalist of zoology.  Also included are a reception featuring tempting desserts and wines; ‘animal walk-abouts,’ which include chats with keepers and the chance to observe small animals up close; and an optional four-course dinner at Reggie’s Bistro inside the Zoo.  Proceeds from the fourth annual fund-raiser, generously sponsored by Whole Foods Market West Hollywood, support the Zoo’s mission of wildlife preservation and conservation at the Zoo and around the world.

Joleen Lutz is a long-time volunteer docent at the Los Angeles Zoo.

Sex and the City Zoo 4: Sexy Beast! is among many Los Angeles Zoo events presented by the private, non-profit Greater Los Angeles Zoo Association (GLAZA), founded in 1963.  For nearly five decades, GLAZA has funded exhibits, plant and animal species conservation, capital projects, and education and community outreach programs at the Los Angeles Zoo, an international leader in the preservation of endangered species and a conservation center for the care and study of wildlife.  GLAZA also builds and invests endowment funds and operates five essential departments on behalf of the Zoo, including development, publications, membership, volunteers and oversight of the Zoo’s food/retail concessions.  There are currently 73,000 GLAZA member households representing more than 300,000 adults and children, the largest membership base of a cultural organization in Los Angeles, and a volunteer corps of over 700.

Located in Griffith Park at the junction of the Ventura (134) and Golden State (5) freeways.

$30.00 per person for GLAZA members, with the dinner option an additional $65 per person.

Seating is limited and reservations are required by February 6, 2013.