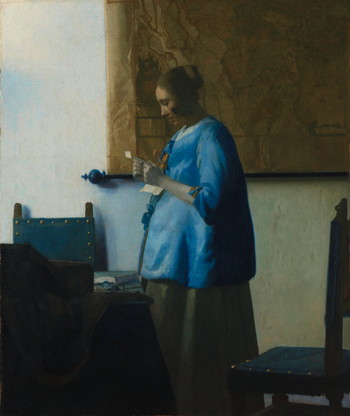 The Getty is the only U.S. stop on a world tour that is promoting and celebrating the forthcoming opening of the renovated Rijksmuseum, Amsterdam. Johannes Vermeer’s painting Woman in Blue Reading a Letter will be on view for six weeks as a special loan from Amsterdam’s Rijksmuseum. The dates are February 16–March 31, 2013, at the J. Paul Getty Museum, Getty Center.

Luminous and exquisitely rendered, Woman in Blue Reading a Letter (about 1663–64) is one of Vermeer’s most captivating portrayals of a young woman’s private world. This generous loan from the Rijksmuseum, Amsterdam marks the first appearance of this remarkable painting in the western United States, and the last stop in a world tour heralding the opening of the Rijksmuseum on April 13, 2013, following an extensive renovation. This special installation situates Woman in Blue Reading a Letter among works by Vermeer’s leading Dutch contemporaries and highlights the inimitable approach of one of the most celebrated painters of the Golden Age.

For six weeks, museum-goers in Los Angeles will have a rare opportunity to experience one of Johannes Vermeer’s most celebrated masterpieces, Woman in Blue Reading a Letter, about 1663–1664, when it goes on view at the Getty from February 16 through March 31, 2013.

The painting comes to the Getty on special loan from the Rijksmuseum in Amsterdam, which is completing ten years of extensive renovations this year. Since October 2012, Vermeer’s masterpiece has traveled the world as an “ambassador” for the Rijksmuseum’s remarkable collection of Dutch paintings. Following presentations in Shanghai and São Paulo, Los Angeles is the last and only North American stop on the painting’s tour, after which it will return to Amsterdam in time for the Rijksmuseum’s much-anticipated opening on April 13, 2013.

“This truly represents an extraordinary opportunity for Southern California,” explains Timothy Potts, director of the J. Paul Getty Museum. “Vermeer’s Woman in Blue is one of his greatest and most famous masterpieces. It has very rarely traveled outside of Amsterdam and this is the painting’s first visit to the West Coast. Vermeer’s paintings of women reading letters and engaged in other private, domestic activities have a unique intimacy and reality to them that can only be fully appreciated in the flesh. His finest works, like the Woman in Blue, have a magical immediacy that has never been rivaled.”

Praised as one of Vermeer’s most beautiful paintings, Woman in Blue Reading a Letter demonstrates the artist’s exceptional command of color, light, and perspective. Portraying a young woman absorbed in a letter, it exemplifies the artist’s ability to create innovative scenes of everyday life imbued with great emotional intensity.  The mystery of the painting makes it even more compelling— although it is most likely a love letter, we do not know who the letter is from, what it is about, or why the painting’s subject is so engrossed by the correspondence.

“This small but powerful painting is exquisitely nuanced, with a marvelously balanced composition and refined use of light that creates a soft, diffuse atmosphere,” suggests Anne Woollett, curator of paintings at the Getty Museum. “Vermeer’s extraordinary command of color is apparent here and visitors will surely be taken with the varied hues of blue that he used throughout the painting.”

Woman in Blue Reading a Letter was recently cleaned and studied in Amsterdam by the Rijksmuseum’s restoration department. Past treatments were rectified and the yellowed varnish was removed, reestablishing the legibility of the composition. Significantly, the treatment revealed Vermeer’s brilliant range of blue hues, visible in their remarkable intensity for the first time in generations, along with a subtle palette of taupes, yellows, ochres, and whites, which themselves have a bluish tint.

Technical studies of the painting, also done at the Rijksmuseum, have revealed that Vermeer made important adjustments to the composition while working on the painting. For example, he extended the left vertical edge of the map on the wall behind the woman toward the window, narrowing the field of white created by the wall. He also eliminated the flared shape of the back of the woman’s blue jacket, emphasizing her vertical presence. Both changes serve to focus the viewer’s attention on the female subject and her thoughts.

Only about 35 paintings are known by Johannes Vermeer (Dutch, 1632–1675), who worked in Delft and is widely considered one of the most distinctive and influential masters of the Dutch Golden Age. While there are a dozen Vermeers in U.S. museum collections, none of his works are in Californian collections. At the Getty, Woman in Blue Reading a Letter will be displayed among paintings by the artist’s contemporaries in the Museum’s East Pavilion.

The world tour and this special presentation were made possible by the generous support of the Rijksmuseum’s main sponsors: Royal Philips Electronics, ING Bank, KPN, and partner in transport KLM Royal Dutch Airlines.

Coincidentally, a second masterpiece by Vermeer, the artist’s Girl with a Pearl Earring, about 1665, will also be on view in California in 2013 as part of the exhibition Girl with a Pearl Earring: Dutch Paintings from the Mauritshuis, at the de Young Museum in San Francisco from January 26 through June 2, 2013, providing visitors on the West Coast a rare opportunity to see two of Vermeer’s most well-known works.

A discussion on the painting; curators of paintings and photographs, art historians, and a cinematographer reflect on Johannes Vermeer’s Woman in Blue Reading a Letter on view at the Getty Center.

Additional information is available at www.getty.edu.