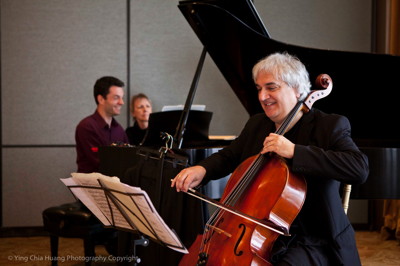 The eighth and final concert of Le Salon de Musiques’ 3rd season will be held this Sunday, May 19, 2013, and will feature Brahms’ Lieder For Soprano, Piano And Viola Op 91 and Piano Quartet N.3 In C Minor as well as Mahler’s Piano Quartet in A minor.

The concert will be introduced by musicologist Julius Reder Carlson and performed by Roger Wilkie on Violin, Helen S. Callus on Viola, John Walz on Cello, Edith Orloff on Piano and Soprano Elissa Johnston.

As always, the performance will be followed by an informal conversation between the musicians and the audience while sipping French Champagne and enjoying a gourmet buffet prepared by Patina.

Artistic Director François Chouchan (pictured right) welcomed us, the ‘Le Salon’ family, saying “Today is a really special one for me, and hopefully for you, too.” Chouchan introduced the jewel of the afternoon’s program, the “very important and amazing Cello Sonata by Camillo Schumann, a work that is unique, romantic and not very well known.” In fact, this piece is made its US premier performance at Le Salon, on April 14.

“It took me six months, with the help of the German Consulate, to locate the score,” Chouchan divulged, personally thanking Michael Aught for his assistance. “It’s such a beautiful piece—really romantic.”  It certainly was. In the Cello Sonata op 65 in G minor, Chopin used the cello as a lyrical voice. Although all written in different periods, the three works selected for the afternoon held a deep emotional and lyrical connection.

Chouchan promised that next year’s season of nine concerts “will dazzle you, for sure. They touch my heart.”

There is ONLY ONE remaining Le Salon de Musiques concert this year – do not miss it!

Edith Orloff on Piano and