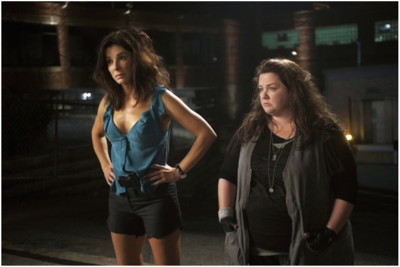 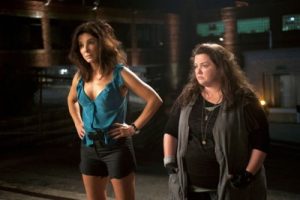 Ever roared, hooted and giggled so hard you actually became afraid you might not be able to stop? The Heat, starring two of Hollywood’s top comediennes—Sandra Bullock and Melissa McCarthy—opens today and this is a ballsy buddy comedy that is not to be missed!

Bullock plays Sarah Ashburn, an unlikeable, uptight FBI agent whose superior attitude (she’s brilliant at her job) and smarmy smile make her extremely unpopular amongst her mostly male colleagues on the force. While she’s vying for a promotion, she’s sent from New York to Boston to track down a drug lord. That throws her in with another equally disliked, highly abrasive and pushy but effective detective Shannon Mullins (Melissa McCarthy). Oil and water do not mix… Nevertheless, the pair join forces, albeit reluctantly, to identify and bring down the crime lord against all odds.

Firstly, the two stars are comediennes with impeccable comedic timing, skills and pitch-perfect performances. The characterizations are wonderful— screenwriter Katie Dippold (Parks and Recreation, MADTV) wrote a clever script that perfectly showcases the talents of both women. Director Paul Feig (Bridesmaids) has also assembled a superb cast of comedians from all over. Finally, this is a storyline with just the right amount of drama, tender moments and heart so that you really care about these two women making it through their story.

I cried about four times (from laughing) in The Heat – oh my dear god this is an unreal comedy. Waterproof mascara is a must!

Best news of all? The Heat 2 has been announced!

The Heat is now playing in major cinemas throughout Los Angeles.