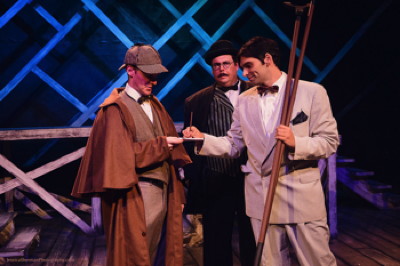 Gentle readers! This week’s theater review for the LA Weekly is of Watson and the Dark Art of Harry Houdini, the exciting sequel now playing at Sacred Fools Theater in Hollywood.

Watson and the Dark Art of Harry Houdini

Sequels are tough. Expectations are generally high and you can never attain the novelty factor of the first outing. Writer-director Jaime Robledo’s Watson and the Dark Art of Harry Houdini, the second installment in his Watson series, is less dazzling (far fewer action set-pieces) and more talky than the first, but maintains his inventive staging and bizarre humor, sending his beloved characters on an ultimately darker, more spiritual journey.

Estranged for the past ten years, sleuthing duo Dr. Watson (Scott Leggett) and Sherlock Holmes (Joe Fria) reunite to solve a string of grisly murders marked by signs of the occult. Their hunt takes them to New York City, where they encounter a legendary escape artist, the mysterious Harry Houdini (a charismatic Donal Thoms-Cappello), who seems to know more than he’s letting on. Meanwhile, Watson is spooked by visions of his departed wife Mary (CJ Merriman).

With its fractured timeline, Robledo’s plotting is more ambitious and demanding than the first installment, 2010’s Watson: The Last Great Tale of the Legendary Sherlock Holmes, yet offers deeper rewards. He neatly incorporates cinematic conventions, such as showing a murder re-enact itself in slow-motion rewind. Nods to Hitchcock (a runaway carousel, cleverly staged) and Bruce Lee (the hall of mirrors sequence) delight, as do numerous pop-culture references.

Carrie Keranen is a welcome addition as Violet Hunter (a minor character from Doyle’s novels and Watson’s love interest) and her gowns (period costuming is by Linda Muggeridge) are especially gorgeous.

Watson and the Dark Art of Harry Houdini.

Written and directed by Jaime Robledo.