The Magic is Missing in This Latest Neil Jordan Film

Byzantium is a name that conjures up mystery and magic, but there’s little of either in this awkward vampire film, directed by Neil Jordan. The story of two females pursued through time by a cadre of evil males, it’s arguably a pro-feminist work whose higher aims and appealing visuals are sabotaged by its maladroit script.

First let me mention the likable things in this movie, which basically come down to two beautiful and eminently watchable actresses—Saoirse Ronan and Gemma Arterton—and some mood-enhancing cinematography. The two actresses play lady vampires: Clara (Arterton) an incendiary hooker whose beguiling wiles conceal a predatory ruthlessness, and Eleanor (Ronan), a quiet and unaffected 16 year-old with a moral sense about whom she preys on to survive. The two pose as sisters in the here and now, but in reality Eleanor is Clara’s daughter, conceived 200 years prior in 1804 when the unfortunate Clara was confined as a whore in a brothel. Before that she’d been an innocent teen living by the sea who had the misfortune to catch the eye of a dastardly military officer named Ruthven (Jonny Lee Miller) who then abducted her, raped her, and sold her into virtual slavery.

Based on her stage play, Moira Buffini’s discombobulated scenario starts out by establishing the two women separately. We meet the moody Eleanor alone in a barren flat, laboring over her manuscript – what we later come to learn is the dark and somewhat sordid family history that she longs to speak about but cannot. The movie radically shifts to the raptorial Clara, plying her trade against a rough-and-tumble carny backdrop – until she spots an unidentified man and breaks into a desperate sprint to elude him. Who this is – well, that’s something that doesn’t become clear until way near the end of the film. Later the two women meet and go on the run, finding refuge in a rundown hotel called Byzantium, owned by one of Clara’s hapless clients, Noel (Daniel Mays), a nervous gentle man whose sexual ineptitude seems to have provoked Clara’s compassion.

Soon Clara has set up a boisterous cathouse under Noel’s anxious eye, while Eleanor drifts off in search of the blood she’ll need to survive another day and is herself discovered by another lost soul, Frank (Caleb Landry Jones), an ailing young man who pursues a relationship, eventually wearing down Eleanor’s resistance to intimacy of any kind.  The two become friends and Eleanor divulges her tale, catapulting us back to the past and into an agonizingly lurid melodrama, replete with rapacious villains, money-grubbing madams and misogynistic vampires, who keep popping up in the present as well.  It’s a setup that works fine as camp, less palatably when (even within the strictures of the horror genre) it’s meant to be taken seriously. Towards the end of an already overloaded plot even more complications emerge when Eleanor’s manuscript comes to the attention of her school authorities (her enrollment in school is an event that slipped by me entirely) and an element of after-school special drama is added to the mix.

Through all this what keeps the film at all interesting are the actors: Ronan, with her thoughtful elegiac air and Arterton, a sexy volcanic avenger who sizzles from start to finish. Against expectations Miller’s creepy evildoer is convincing. Mays and Sam Riley, as Ruthven’s handsome gentlemanly foil, both deliver characters complex enough to care about. Given the talent, it’s too bad the narrative, with its loopy, labyrinthine twists and turns, hasn’t more gravitas. 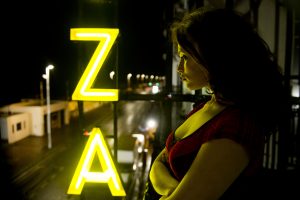 Byzantium is now playing at the Landmark cinema in West L.A.