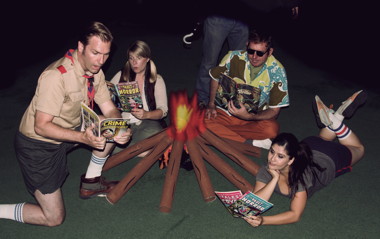 Captured Aural Phantasy Theater (CAPT) is proud to celebrate its 5th year performing in Los Angeles with a return to the historic El Cid for another season of monthly shows!

Beginning THIS Sunday, August 4, this league of theater geeks, who blend comic books, pop culture and the absurd, will continue to thrill audiences with its signature variety show format that includes a special mix of live music, artful projections, radio show-style performance and entertaining acts.

To kick off this next run, they will present Comic Book Summer Camp on Sunday, August 4, a show that celebrates the season with live multimedia performances of summer-themed comic book stories, music and other pop-culture artifacts perfect for a warm night. Gather around the campfire and hear what’s been going on over summer vacation like surfin’ at Redondo Beach in 1967’s “Surf N’ Wheels” or Superboy two-timing Lois and Lana in the woods. In between, enjoy comedic bits, music, campfire songs, art and special surprises. Channeling their inner Meatball, they ask: “Are you ready for the summer?”

Shows start at 8:30pm, but doors open at 7:30pm so audiences can revel in El Cid’s 100 year-plus history while enjoying a brand new tapas menu and superb cocktails. Get there early to grab a good seat and enjoy some excellent food, or get a perfect seat near the curtain and just start drinking!