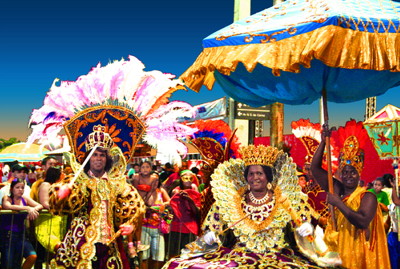 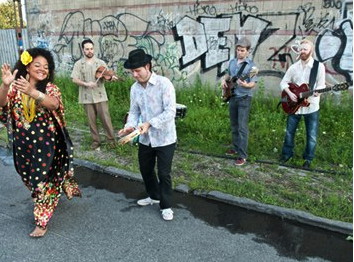 Pulsing drumbeats, spectacular costumes, and infectious call-and-response songs transport you to the northeast coast of Brazil. Steeped in both African and indigenous traditions, Maracatú is the dynamic, propelling rhythm of life’s celebrations.

Straight off of Estrela Brilhante’s win at the 2013 Carnival Maracatú competition, this performance pairs the renowned and respected group with Brooklyn-based Nation Beat. On this premiere U.S. tour, these two groups deliver a faithfully reincarnated pageant with bold contemporary manifestations.

Commemorating the 35th anniversary of the Brazilian Hour’s locally produced, internationally-heard radio program, this free event will pair award-winning Brazilian performance group Nação Estrela Brilhante, with New York City-based Nation Beat.  United in concert to bring the roots of traditional maracatú together with its contemporary manifestations, the event, which starts at 8:00pm, will transform the spectacular One California Plaza, amidst the dramatic Los Angeles skyline, into a riot of thunderous indigenous rhythms, infectious call-and-response songs, and colorful pageantry with spectacular costumes.

Mielniczenko, who will serve as the event’s host, talks about the cultural relevance of this concert, “Brazil is immensely rich, musically and culturally. We are honored to have the opportunity to experience the tradition of maracatú rhythms and dance in Los Angeles for the first time.”  Maracatú is the soul of the music of Recife, the capital city of the Northeastern State of Pernambuco.

The Brazilian Hour radio program, heard locally in LA on its original broadcaster, KXLU 88.9FM, is one of the longest running international radio shows in the U.S., and is heard on NPR stations across the country (and outlets around the world!).  Produced in 5 languages, the program showcases the country’s music and culture by providing audiences worldwide with a rich and deep taste of Brazilian culture.  In celebrating its 35th anniversary this year, the Brazilian Hour is readying its global audience for two significant events taking place in Brazil: the World Cup in 2014 and the Summer Olympics in 2016.

For additional information on the Brazilian Hour, see their official site.

The Tale of Two Nations audience is invited to take an active part in the event by dressing to impress in their festive best and donning their dancing shoes for the special occasion.  California Plaza, the home site of Grand Performances, is part of the Grand Avenue Cultural Corridor just blocks from Disney Hall and home to the Museum of Contemporary Art.

(Arrive early to snag a seat)

The California Plaza parking garage is accessible on Olive Street,

between 1st and 4th street.

Complimentary bike valet will be available on the Upper Plaza.

The event marks the first time the ancient art of maracatú drumming will be performed in Los Angeles.  Sergio Mielniczenko, the founder and host of the Brazilian Hour, who will be on hand to host the event, talks about the cultural relevance of this concert, “Brazil is immensely rich, musically and culturally, and for us to have the opportunity to experience the tradition of maracatú rhythms and dance in Los Angeles is a rare opportunity.  Maracatú is the soul of the music of Recife, the capital city of the Northeastern State of Pernambuco.”

Produced by Grand Performances and supported by the James Irvine Foundation, the Los Angeles event is the last stop of the Tale of Two Nations U.S. tour.

Created by the Cultural Sector of the Brazilian Consulate-General in Los Angeles in 1978, the Brazilian Hour radio program showcases the country’s music and culture to provide audiences worldwide with a rich and deep taste of Brazilian culture.  Its host and producer, Sergio Mielniczenko, has been at the helm for the show’s entire time, guiding the Consulate’s most important cultural export.  In celebrating its 35th anniversary this year, the Brazilian Hour is readying its global audience for two significant events taking place in Brazil: the World Cup in 2014 and the Summer Olympics in 2016.

To coincide with the Tale of Two Nations concert, the radio show will launch two new stations in August via the Brazilian Hour website – La Hora Brasileña with Host Denise Lebré in Spanish and L’Heure Brésilienne with Host Ana Maria Fontoura in French.  In Los Angeles, the show is heard on its original broadcaster, KXLU 88.9FM.  One of the longest running international radio shows in the U.S., the show is heard on NPR stations across the country.

Maracatú de nação (national style maracatú, or “nação” for short) is a dynamic Afro-Brazilian performance genre from the northeast of Brazil.  Propulsive and dramatic, steeped in African and indigenous tradition, this cultural performance derives from a ritual of the African slaves in Recife (the capital and largest metropolitan city in northern Brazil), going back over 400 years, when they crowned their own king inspired by the Portuguese colonizers.  When slavery was abolished in Brazil in 1888, nações continued to choose symbolic leaders and evoke coronation ceremonies for those leaders.  Traditional nações perform by parading with a large drumming group (80 to 100), a singer and chorus, a coterie of dancers, and stock characters including the king and queen.  The massive percussion groups and dancers lead the way for the king, queen, princess, and crowds of revelers who follow the rhythm of the music and the movement of the court.

Founded in 1906, Estrela Brilhante (‘Bright Star’) has become one of the most renowned and respected traditional maracatú groups in the world.  Their music and performance reflect not only more than 100 years of personal history, but several centuries of Afro-Brazilian traditions in northeastern Brazil.  These histories are condensed into a colorful and vibrant ritual, an ancient Carnival art filled with pulsating rhythms, call and response songs, and infectious dance.  Led by the legendary Mestre Walter and Queen and President Dona Marivalda, Estrela Brilhante has accomplished several remarkable achievements including releasing the first maracatú recording, Amazônica (Sony Music), in 1996 and contributed a track to the live CD Pernambuco em Concerto (África Produções) in 1998.  They have performed throughout Brazil and hold numerous Carnival competition championship titles in Recife.  Over the last decade they have performed throughout Europe including EXPO 2000 in Hanover, Germany and other prestigious festivals.  Maracatú Nação Estrela Brilhante’s tour is made possible through Southern Exposure: Performing Arts of Latin America, a program of Mid Atlantic Arts Foundation in partnership with the National Endowment for the Arts and the Robert Sterling Clark Foundation.

Estrela Brilhante will be joined by members of Nation Beat.  The infectious American-Brazilian collective, Nation Beat, plays a 21st century mash-up inspired by Brazilian maracatú drumming, New Orleans second line rhythms, Appalachian music, funk and country-blues.  In 2005, Nation Beat’s Scott Kettner successfully brought together Estrela Brilhante with New York City-based Nation Beat for a historical collaboration.  Recorded in Recife, Brazil, the resulting Nation Beat debut CD, Maracatuniversal, is the first collaboration between a traditional maracatú nation and a contemporary band.   They are also the first Brazilian band to perform with Willie Nelson, who called Nation Beat “just a fantastic group.”  NPR’s All Things Considered music writer Banning Eyre called the band “the most original and alluring fusion group I have heard in years.”  Based in Brooklyn, the group is a regular of both American and Brazilian festivals. http://www.nationbeat.com

About The Brazilian Hour –

Made possible by the Ministry of External Relations of Brazil, the Brazilian Hour was first introduced at Los Angeles radio station KXLU 88.9FM on March 5, 1978.  Since the beginning, the show has been hosted, written and produced by Sergio Mielniczenko.  To this day it continues to be broadcast on KXLU 88.9FM on Saturdays and Sundays, 9:00-10:00am (PST).  Show content is also available 24/7 through Brazilian Hour’s website, Live 365, and a new free application for iPhone, iPad and Android.  In 1981, the Brazilian Hour started national distribution via satellite to public radio stations in the United States.  Nearly 40 NPR stations across the country currently broadcast the show.  Internationally, the show is heard in diverse lands such as Sri Lanka, Cuba and Gabon in West Central Africa.  The Brazilian Hour also distributes the program internationally to hundreds of Brazilian diplomatic missions and cultural centers around the world.  Currently, the show is produced in English, Portuguese and Mandarin, with Spanish and French shows coming in August.  The show features not only the most popular styles of Brazilian music – bossa nova, música popular Brasilera (MPB) and samba – but also a full range of traditional and contemporary Brazilian music including choro, Brazilian jazz, forró, frevo, and many other styles.

Sergio Mielniczenko, staff member of the Cultural Sector at the Consulate-General of Brazil in Los Angeles, has spent the past three decades of his professional career introducing worldwide audiences to the best of Brazilian music and culture.  He is the producer/host of the Brazilian Hour, heard on KXLU 88.9FM in Los Angeles, NPR stations across the country, and beyond.  Mielniczenko is also a weekly host of KPFK 90.7FM’s Global Village every Friday, an international open format program featuring live music performances and interviews from around the world.  He is an accomplished musician, multimedia project producer, and film documentarist.  After studying composition and conducting in São Paulo for two years, he moved to the States to finish his music education, but instead became interested in mass media studies resulting in a BA in Radio & Television Broadcasting from CSU Northridge and a Professional Designation Certificate in Recording Arts and Sciences at UCLA.  He has been honored throughout his career by the Brazilian Government (Ordem de Rio Branco), three times by the Brazilian International Press Association, including this year’s special gold award, the City of Los Angeles, and KPFK 90.7FM.

Grand Performances (GP), Los Angeles’ premiere free outdoor summer performing arts presenter, is known for providing Angelenos with an eclectic mix of high quality performing arts by world-renowned artists across genres.  Now in its 27th year, Grand Performances presents a 10-week concert series every summer of shows in Downtown Los Angeles featuring music, film, theater, and live talks.  GP presents the best of global culture to inspire community among the diverse peoples of Los Angeles, reflective of the many cultural interests across the region.  All are welcome to enjoy GP’s unique, awe-inspiring venue nestled under the spectacular Downtown skyline, surrounded by water.  The venue is located right next to the Museum of Contemporary Art (MOCA).  Grand Performances is a 501(c)(3) located on Bunker Hill.