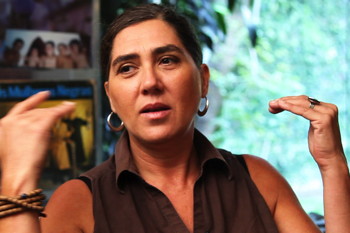 Now running until this Sunday, The Hollywood Brazilian Film Festival (HBRFest), continues to champion the best in new Brazilian independent cinema direct from the international festival circuit, presenting films that break the stereotypes of how Brazil is portrayed.

Currently in its fifth year, the festival will be presenting more than thirty Los Angeles premieres showcasing fiction, documentaries and shorts of artistic merit, from July 31 through August 4, at the Egyptian Theatre in Hollywood.

All screenings are FREE of charge, excluding Closing Night.

Ticketing info for that event below.

Dedicated to addressing the cultural and commercial exchange between Hollywood, the world film industry and the Brazilian film community, HBRFest will feature Portugal as the ‘Guest Country’ and will also present a night of gay-themed films amongst its offerings of fresh discoveries.

At last night’s Opening Night Gala Film, audiences enjoyed “While my Guitar Gently Weeps,” the international premiere of a hard-hitting, modern family drama directed by acclaimed, award-winning Anna Muylaert  (“Smoke Gets in Your Eyes”, “Collect Call”), heralded as a beacon of a new generation of Brazilian women filmmakers.  Also screening was the Los Angeles premiere of “The Package,” Rafael Aidar’s powerful short film drama about the passion of two teenagers from São Paulo.  “The Package” received its world premiere at the 2013 edition of the Berlinale.

The festival will close with the Los Angeles premiere of Muylaert’s debut award-winning comedy “Durval Records.”

Over a dozen guest filmmakers are expected to attend the festival to present their films including Juliana Rojas, (fresh off the Cannes’ Cinefondation Residence), Sergio Andrade, director of the very first feature entirely produced in the Amazon State, and the tireless Gabriel Mascaro who has two films in the festival.

All films screening in the fiction, documentaries and shorts sections are eligible to compete in HBRFest’s “IndieBrazil Competition.”

All films are in Portuguese with English subtitles, unless specified.

See the official site for more information and the complete program.

Industry panels offered at HBRFest include the return of the popular “Directors’ Roundtable” panel on the creative process moderated by former Variety critic and Latin American cinema authority Robert Koehler and featuring attending Brazilian filmmakers. Also scheduled is a “Focus on Diversity” panel discussion with Deborah Calla of PGA, Kimberly Myers of WGA and Regina Render of DGA.  Both panels will take place at the classic Arena Cinema, adjacent to the Egyptian.

“In our fifth year of the festival, we are thrilled to be presenting our very first world premiere in addition to some notable international premieres.  We are also honored to be paying tribute to one of Brazil’s most prominent filmmakers, Anna Muylaert,” said Founder and Executive Director, Talize Sayegh.

A highlight of the festival will include a gay-themed night with screenings of Allan Ribeiro’s dance feature, “This Love That Consumes” in its international premiere and Marcelo Caetano’s short “By Your Side,” a high-spirited look at love in a modern Brazilian city, where relationships come and go.

Other festival highlights include the international premiere of Joel Pizzini’s “Mr. Sganzerla” about the iconic director Rogerio Sganzerla; the North American premieres of Felippe Schultz Mussel’s documentary “A Place to Take Away” on Rio’s famed favelas and Marcos Pimentel’s documentary “Breath” on the mysteries of life and death, in addition to André Novais Oliveira’s short “About a Month,” which received a Special Mention at the 2013 Cannes Directors’ Fortnight, and Leonardo Mouramateus’ “Mauro in Cayenne” which won Best Short in the influential Cinéma du Réel Festival.

The Hollywood Brazilian Film Festival is presented by Riofilme.  Sponsors include One Digital and Copa Airlines.  Cultural support comes from the Ministry of Foreign Relations (Itamaraty), Ancine (Brazilian Cinema Agency) and the Consulate General of Brazil in Los Angeles.

Details of tickets and events can be found at their official site here.

Back by popular demand, attending filmmakers will participate in a special Filmmakers Roundtable moderated by Robert Koehler, former Variety critic and expert in Latin American cinema.   In addition to industry, this event is open to the public and will provide great insight into the current state of Brazilian filmmaking, trends and an opportunity to meet the rising talent of Brazil.

Announcing the arrival of a fierce new filmmaker voice upon its release in 2002, this wickedly delicious music homage to the LP era, and vibrant 70s Brazilian sound scene, is about a middle-aged struggling record storeowner still living with his mother.

Director, screenwriter Anna Muylaert will be HBRF’s 2013 Guest of Honor. The festival will open on July 31st with the International Premiere of Muylaert’s latest film “While My Guitar Gently Weeps” and will close on August 4th with the Los Angeles premiere of her first feature “Durval Records”.  Muylaert is an internationally renowned writer, producer and director based in São Paulo.  She started her career as a film critic for the Estadão newspaper and Isto É magazine. Her remarkable body of work includes the dark comedy “Smoke Gets in Your Eyes”, the thriller “Collect Call”, and countless collaborations with the most respected filmmakers working in Brazil today.

ABOUT THE HOLLYWOOD BRAZILIAN FILM FESTIVAL:

Born from a desire to bridge the gap between the Brazilian and Hollywood film industry communities, the Hollywood Brazilian Film Festival launched in 2009 with a clear mission to introduce the fiercely independent-minded filmmaker voices transforming Brazil’s creative and artistic capital. Driven towards creating invaluable cultural exchange and mutually beneficial partnerships connecting filmmakers, producers and talent on both sides of its far reaching borders, HBRFEST has established itself as the preeminent source of Brazilian discovery in the U.S.   Evoking the dazzling setting of Brazil’s world-renowned, one of a kind, vibrant festivities and unique fusion of diverse heritage, audiences will enjoy, discover and be inspired, ultimately revealing that truly visionary cinema has the power to break boundaries and engage.

The Hollywood Brazilian Film Festival is presented by Riofilme.   Sponsors include One Digital and Copa Airlines.  Cultural support comes from the Ministry of Foreign Relations (Itamaraty), Ancine (Brazilian Cinema Agency) and the Consulate General of Brazil in Los Angeles.

Riofilme, founded in 1992, and revitalized with additional funding in 2009, is run by the Municipal Government of Rio de Janeiro.  It was established to support the production and distribution of films in Rio de Janeiro investing in development, production, exhibition, marketing, infrastructure and training, also acting in partnership with the private sector, with a view to improving the economic and social impact of the industry on the city.

An advertising agency that goes beyond the traditional digital communication.

Copa Airlines offers more than 280 daily scheduled flights among 65 destinations in 29 countries in North, Central and South America and the Caribbean from its Panama City hub.

About Ministry of Foreign Relations (Itamaraty)

The Ministry of Foreign Relations (Abbreviation: MRE; Portuguese: Ministério das Relações Exteriores) conducts Brazil’s foreign relations with other countries. It is commonly referred to in Brazilian media and diplomatic jargon as the Itamaraty

Details of tickets and events can be found at their official site here.