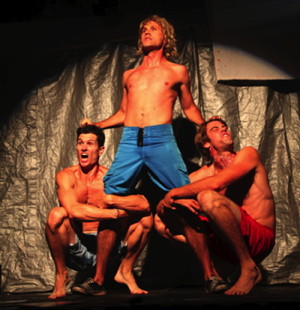 Gentle readers! This week’s theater review for the LA Weekly is of the hilarious spoof show Point Break Live!, now playing at Dragonfly in Hollywood.

What do we mean by “soaked”? Let’s just say you’d be wise to take them up on the $2 ponchos for sale before the show.

The low-tech, seat-of-the-pants, interactive presentation of an abbreviated version of Kathryn Bigelow’s slightly corny 1991 cop surf drama is further camped up by a fun-loving cast. The actor playing the central role of Johnny Utah — memorably portrayed onscreen by Keanu Reeves in his “Woah, dude” stoner phase — is recruited from among the dozen or so audience members who audition on the spot and are rated by the audience. The rookie performer then goes on to utter dialogue aided by cue cards. (Too bad opening night’s guy was virtually illiterate and inexplicably prone to channeling Forrest Gump.)

Utah’s volatile detective partner, Pappas, is well played by Tom Fugedi, though he would benefit from a bit more crazy Gary Busey and a bit less Chris Farley in his performance. Tobias Jelinek is excellent as the bizarrely spiritual crime boss/surfer guru Bodhi.

The plastic ponchos offer protection from the barrage of water spray, blood splatters and — uh — other bodily fluids…