Hollywood Sign celebrates its 90th Anniversary with a White Party

This week, the towering icon of Tinsletown – the Hollywood Sign – is celebrating its 90th Anniversary with a ‘White Party’ event at Drai’s Hollywood on the rooftop of the W Hotel on Thursday, September 19.

The Hollywood Chamber of Commerce and the Historic Sign Trust have announced ‘The White Party’ celebrating the 90th Anniversary of the Hollywood Sign presented by the Hollywood Museum.

Celebrities, historians and dignitaries are expected to attend, including Bob Barker, famed “The Price is Right” host – also celebrating his 90th – who will toast Tinseltown’s biggest star.

You’re invited to attend the party and join in the celebration! 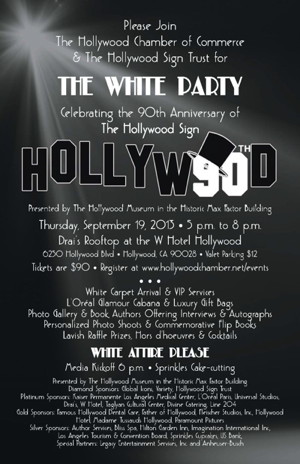