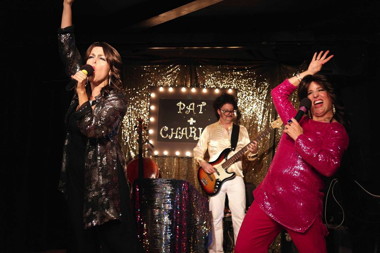 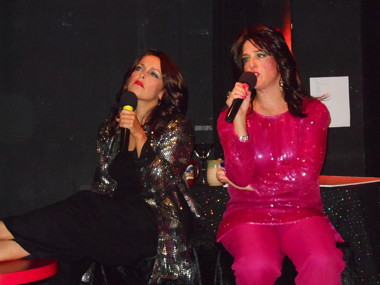 Nancy Kissam and Linda Santiman star a hilarious send-up of those hip and groovy TV Variety shows of the seventies (think Sonny & Cher and Donny & Marie) in The Pat & Charlie Variety Hour, now playing at The Cavern Club Celebrity Theater TONIGHT and for one more weekend (Oct 18th and 19th ).

Pat & Charlie Van McClansky are long lost swingin’ and singin’ twin sisters who fell out of touch when Charlie left the duo to marry their talent manager Eddie (who turned out to become very good friends with his next employer, Paul Lynde…) and Pat became addicted to quaaludes and public nudity. But now they’ve returned for this reunion show… Bring on the cheese!

Will the sisters harmonize again after years of friction?  Can Pat forgive Charlie for breaking up the duo?  Can Charlie forgive Pat for flashing her children?  Will there be puppets?  Mime?  Paul Lynde’s head on a stick?  Yes, yes and yes (to those last three questions).  The rest is for you to find out!

Co-starring as Charlie’s ex-husband Eddie (and comedically stealing the spotlight every chance he gets) is Mike Rainey who backs the wacky pair on bass guitar, providing random sound effects and gorgeously playing the cello. Sporting feathered hairdos, glittering sequined pantsuits and gold heels, the zany sisters whiz through their hour-long show with wit and verve, simulating drunken hijinks and occasional lapses in sanity. The lively recap of their lost years—more for the benefit of each other than for us—are interspersed with laughs, twin mind melds, bitter recriminations, songs and upbeat live advertisements for delicious seventies gourmet treats such as Hamburger Helper and Easy Cheese in a can.

The songbirds give fantastic renditions of all your favorite seventies classic tunes, including the corniest of the Bond songs “Nobody Does it Better,” The Carpenters’ “Top of the World,” Maxine Nightingale “Get Right Back Where We Started From,” Cheryl Lynn’s disco classic “Got To Be Real” and even Sam Cooke’s “I Want To Thank You” re-worded to illustrate Pat’s tale of abduction.

This is a super fun show, so catch it while you can!

That’s the 1st and 3rd weekend of October, kids!

Visit their website for more details and ticket info.