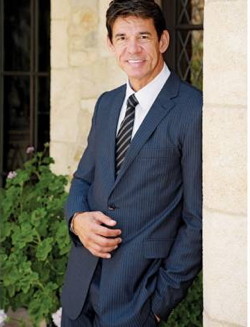 Not only does architect and designer Richard Landry realize other people’s dreams for a living; he admits that he, too, is living his dream life. He confesses, “Absolutely, I’m dreaming. Architecture has always been my passion. This is a full-time hobby, and it’s nice that people pay me for it—because it doesn’t feel like work. I love doing this.”

He loves it so much, in fact, he has designed numerous times for himself. Richard owns four homes—from modern to traditional—including “a cottage, a ski place and a home in Malibu made from an old barn.”

Richard’s mild voice with its soft, Québécois accent glides musically. These days, the handsome, well-respected architect gets to play on a grand scale, specializing in custom-designed, high-end residential projects. “We are unique in that we don’t have a signature look. It’s about helping our clients, who want their dream home, understand what that is.”

Consequently, Richard’s designs cover a vast spectrum—everything from ultra-modern to traditional styling. “I enjoy the direct relationship that you get with a client,” he murmurs. Clients include luminaries such as musicians Kenny G and Rod Stewart, sports stars Sugar Ray Leonard, Tom Brady and his model wife Gisele Bündchen, and actor Mark Wahlberg.

Richard started his own architecture firm in West LA 26 years ago, three years after he relocated from Canada. Today he employs more than 40 architects, plus a support staff of three. All are immersed in numerous projects that currently span 15 countries.

Closer to home, however, are several of Richard’s creations—stunning, luxury homes in the San Fernando Valley, all of which offer a nice sampling of his range and talents.

A television writing couple commissioned the Landry Design Group to create their Encino home, following the rugged traditional architecture of the rural Italian villages, medieval castles and rustic villas they visited in their travels. Melding classic with modern, Richard came up with an “old-world, Tuscan villa style,” devising a rambling floor plan to complement the family’s casual lifestyle.

“They wanted old, rural Italian architecture, and we wanted to give it a fresh look,” says Richard, who created a “layering effect” with elements that included earthy stonework, a colonnade of Doric columns of pre-cast concrete, lacy wrought iron, and limestone flooring and fireplaces. He described one feature as “a sitting room that’s indoor, but with a huge [multi-paned] glass wall that separates it from the outdoor covered loggia.” The vast eat-in kitchen has rustic accents, including marble-topped custom cabinetry and a ceiling made from reclaimed barn wood.

To read the rest of this report, please go here.