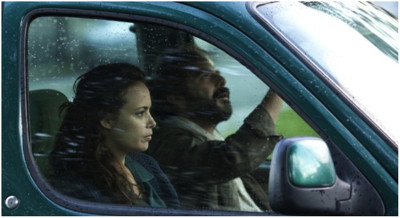 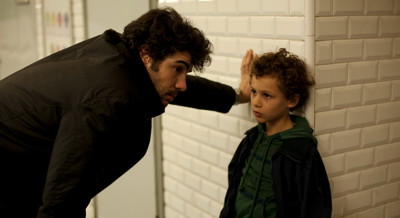 Though it unfolds in the present, writer/director Asghar Farhadi’s beautiful new film underscores how difficult it can be to elude the past.

His first to be shot outside his native Iran, the film opens at the Paris airport on a rainy overcast day, where a lovely thirty-something woman, Marie (Bérénice Bejo) waits impatiently for an arriving passenger, a self-contained and self-possessed man named Ahmad (Ali Mosaffa).

Their tender greeting –  that special kind that exists between long-time intimates who know each other well – takes place through the glass window of the airline terminal. One’s first impression is that these people are lovers in the here and now, but we soon learn that that phase of their relationship has long passed; rather, they are separated spouses, living apart for 4 years and just now reconnecting to finalize their divorce. In fact, by the time they’ve made it from the terminal to Marie’s vehicle, drenched from pouring rain, the euphoria of their first sighting has passed, and the bickering and questioning has set in.

That contentiousness, mixed with abiding affection, endures throughout the winding story, much of which takes place in Marie’s cramped ramshackle abode, which she shares with her two daughters and her current boyfriend Samir (Tahar Rahim), who not so coincidentally bears a physical resemblance to Ahmad. A prickly thorn in Marie’s side is Samir’s young son Fouad (Elyes Aguis), a troubled boy confused by the long-term illness of his mother, confined to a hospital in a coma, and his subsequent sense of displacement under Marie’s roof. Though Fouad’s contrary mulishness angers Marie, he’s nowhere near the source of anxiety for her as her 16 year old daughter Lucie (Pauline Burlet), who stays out late and whose rages against her mother and Samir have become a ticking time bomb that threatens the family’s stability and their future. 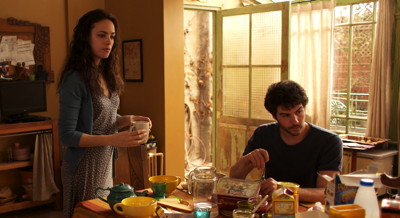 Into this unsettling emotional morass steps Ahmad. Reluctant to become involved, preferring a hotel to Marie’s chaotic nest – he repeatedly asks why she insists he remain under her roof – he nonetheless steps up to the plate, working to cultivate Fouad’s trust and undertaking, at her request, to discover the source of Lucie’s animosity and ire. With both young people he succeeds. Though he’s not her biological father Lucie loves Ahmad and trusts him.  When she does open up, the story opens up with her, branching out in unexpected directions and elevating Samir from a secondary figure to a major one. No longer just a foil for Ahmad, Samir’s personal history and interior life now move center stage, a precursor to the knockout catharsis that forms the climax of the film.

That’s not to say that the other principals fade away. In the landscape of Farhadi’s films, relationships are primary. What make his stories so illuminating—I’ve now seen two of his films, this one and the brilliant A Separation, released in 2011—is the depth and scope of each character, and the opportunity of the filmgoer to venture into the interior space of each complex personage, concurrently. Another element that distinguishes  his work is its moral aspect – an ethical framework that surrounds and supports not only the central players but the secondary ones also, including the children. For despite their difficulties, and whatever their shortcomings, the people he writes about try very hard to do the right thing. Overlay considerations like these with discerning, exquisitely-crafted performances and you have exceptional art.

The Past is screening in selected cinemas throughout Los Angeles.